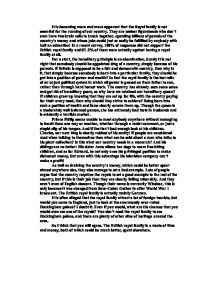 It is becoming more and more apparent that the Royal family is not essential for the running of our country.

It is becoming more and more apparent that the Royal family is not essential for the running of our country. They are useless figureheads who don't even have two brain cells to knock together, spending billions of pounds of the country's money and whose jobs could just as easily be fulfilled by anybody with half an education! In a recent survey, 100% of responses did not support the British royal family and 87. 5% of them were actually against having a royal family at all. For a start, the hereditary principle is an abomination. Surely it is not right that somebody should be appointed king of a country, simply because of his parents. If Britain is supposed to be a fair and democratic country, then why is it, that simply because somebody is born into a particular family, they should be put into a position of power and wealth? ...read more.

Being born into such a position of wealth and fame clearly screws them up. Though the queen is a moderately well balanced person, she has extremely bad taste in husbands and is evidently a terrible mother. Prince Philip seems unable to meet anybody anywhere without managing to insult them one way or another, whether through a racist comment, or just a stupid slip of his tongue. And if that isn't bad enough look at his children. Charles, our next king is clearly robbed of his sanity! If people are considered mad when talking to themselves then what can be said about a man who talks to his plant collection? Is this what our country needs in a monarch? ...read more.

And they aren't even of English descent. Though their name is currently Windsor, this is only because it was changed from Saxe-Cober Gother in after World War 1 broke out. The British royal family is actually mainly German. It is often alleged that the royal family attract a lot of foreign tourists, but would you come to England, just to look at the enormously over-rated Buckingham palace? I doubt it. Even if you would, what are the chances that you would even see one of the royals? You don't need the royal family to see Buckingham palace, and there are plenty of other sites of heritage around the area. So I think that you will agree. The British royal family is a waste of time and money, both of which could be much better, spent elsewhere. ...read more.