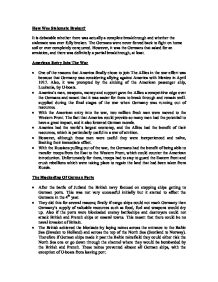 It is debatable whether there was actually a complete breakthrough and whether the stalemate was ever fully broken. The Germans were never forced back to fight on home soil or ever completely conquered. However, it was the Germans

How Was Stalemate Broken? It is debatable whether there was actually a complete breakthrough and whether the stalemate was ever fully broken. The Germans were never forced back to fight on home soil or ever completely conquered. However, it was the Germans that asked for an armistice, and there was definitely a partial breakthrough, at least. American Entry Into The War * One of the reasons that America finally chose to join The Allies in the war effort was because that Germany was considering allying against America with Mexico in April 1917. Also, it was prompted by the sinking of the American passenger ship, Lusitania, by U-boats. * America's men, weapons, money and support gave the Allies a competitive edge over the Germans and meant that it was easier for them to break through and remain well-supplied during the final stages of the war when Germany was running out of resources. * With the American entry into the war, two million fresh men were moved to the Western Front. ...read more.

Therefore if German ships made it past the Baltic minefield they could either risk the North Sea one or go down through the channel where they would be bombarded by the British and French. These mines prevented almost all German ships, with the exception of U-boats from leaving port. * The effect of this tactic was that Germany slowly began to run out of resources without the supplies coming in from overseas. * The Germans could either surrender instead of running out of supplies, or go for one final offensive. Either way, the stalemate would be broken. The chose to go for one final offensive. * The Germans also rebelled against the blockade by creating a big U-boat force to act as a counter blockade. This was very successful and it was calculated that Britain was down to its last five weeks of food when Lloyd George invested in anti submarine devices and this situation was turned around. ...read more.

* However, they were generally mechanically unreliable and unsound, with commanders unsure of how to use them effectively, technically or strategically. The infantry also could not keep up with them and they were used in isolation, with a chunk of them breaking down before even reaching the enemy lines. Also, they relied on support from behind, to refill with petrol. By the end of the war, they were being used far more effectively, in formation. They were used to great effect at Amiens in 1918. * In this war, airpower was mainly used for observation and spying, as they had a very limited flying range, were not strategic and had a lack of space. In the early stages, there were many casualties from poor landings and simply falling from the sky. They were also very inaccurate, and did very little damage to enemy trenches or supply lines. * Gases like chlorine were also used as a weapon. They were put into the air to damage oncoming enemy troops and to restrict their breathing. This was unreliable as if the wind changed direction, it could back fire killing your own troops. ...read more.