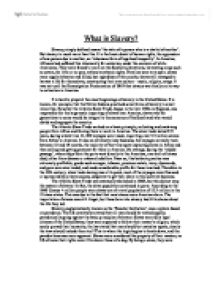 It is hard to pinpoint the exact beginnings of slavery in the United States. It is known, for example, that the Native Indians practised some forms of slavery in small minorities. However the Atlantic Slave Trade, begun in the late 1500s

What is Slavery? Slavery, simply defined means 'the state of a person who is a chattel of another'. But slavery is much more than this. It is the basic denial of human rights, the oppression of one person due to another, an 'inhumane form of legalised inequality'. In America, Africans had suffered this inhumanity for centuries, under the coercion of white Americans. They were forced to work on the Southern plantations, harvesting crops such as cotton, for little or no pay, without any basic rights. Families were torn apart, slaves were regularly beaten and killed; but regardless of this cruelty, slaves still managed to harvest a life for themselves, constructing their own culture - music, religion, songs. It was not until the Emancipation Proclamation of 1863 that slavery was finally on its way to extinction in America. It is hard to pinpoint the exact beginnings of slavery in the United States. It is known, for example, that the Native Indians practised some forms of slavery in small minorities. However the Atlantic Slave Trade, begun in the late 1500s in England, was responsible for the large-scale importing of slaves into America; slaves who for generations to come would be integral to the economy of the South and who would divide and segregate the country. The Atlantic Slave Trade worked on a basic principle, collecting and enslaving people from Africa and forcing them to work in America. The slave trade lasted 245 years, during which time 11, 000 voyages were made, importing over 3.3 million slaves from Africa to America. It was an extremely risky business; the voyages normally took between 12 and 18 months, the majority of that time spent capturing slaves in Africa and then selling and getting payment for them in America. ...read more.

His job was to make sure that everyone was working efficiently and then punish those who were not. After him would come the slave driver, usually a trusted or respected older black slave, whose job was similar to an overseer. This job, although having many advantages over just being a fieldworker, caused resentment between the other slaves, who saw them as taking on the characteristics of a white man. The slave workers were at the bottom of this hierarchy. A slave's day would begin early, usually just after sunrise, and they would work right through until sunset. Usually a slave's work was hard, physical labour, and would be extremely tiring. They would have to keep working continuously, or risk punishment from the overseer, who would work alongside them. In some smaller plantations, slaves would work alongside their masters. Some slaves were allowed weekends off, but this was no time for rest. This precious bit of spare time would be spent looking after their own plots of land and doing domestic chores. It was a hard, gruelling lifestyle. Domestic work, although having more unpredictable hours, was less physically draining work. They would usually work in the Great House, as butlers, maids or cooks, and would have much interaction with their masters and their families. Women would most often work in houses, and often had different problems to contend with. It was not unusual for a white master to take a black slave as his mistress. Religion Slaves had little control over most aspects of their lives, so for many slaves religion was very important to them, as it was the one area they were in charge of. ...read more.

recognize and maintain the freedom of such persons and will do no act or acts to repress such persons, or any of them, in any efforts they may make for their actual freedom." Frederick Douglass, an escaped slave and abolitionist, was also an integral part of the system. From 1847 to 1863 he published an abolitionist newspaper known as the North Star, financed by British contributors. His chief aims were to "abolish slavery in all its forms and aspects, advocate UNIVERSAL EMANCIPATION, exalt the standard of public morality, and promote the moral and intellectual improvement of the coloured people, and hasten the day of FREEDOM to the Three Millions of our enslaved fellow countrymen." Douglass had been born into slavery, but had managed to escape in 1838. Since then he had become a renowned abolitionist speaker; he gave his lecture fees to help runaway slaves and controlled the Rochester station of the Underground Railroad. John Brown was fiercely anti-slavery and in 1850 he recruited 44 men into an organisation that was founded to resist slave-catchers, known as the US League of Gileadites. He moved to Kansas in 1855 to help the anti-slavery forces to gain control of the region. He founded a refuge for runaway slaves in Virginia. In 1859 he tried to encourage slaves to join his rebellion by planning a successful attack on the federal armoury at Harpers Ferry. Although this was successful, he was later convicted of insurrection, murder and treason and was executed on the 2nd December 1859. Brown failed to spark a general slave revolt but the high moral tone of his defence helped to immortalise him and hasten the war that would bring the emancipation of slaves. ?? ?? ?? ?? ...read more.