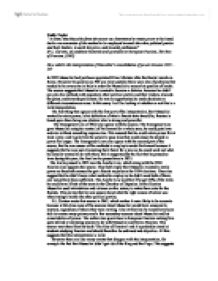 &quot; It seems that Mussolini from the outset was determined to retain power in his hand; but he was uncertain of the method to be employed towards the other political parties and their leaders, towards the press, and towards parliament&quot;

Emily Taylor " It seems that Mussolini from the outset was determined to retain power in his hand; but he was uncertain of the method to be employed towards the other political parties and their leaders, towards the press, and towards parliament" (F.L. Carsten, an academic historian and specialist on European Fascism, The Rise of Fascism, (1967) How valid is this interpretation of Mussolini's consolidation of power between 1922-25? In 1922 Mussolini had just been appointed Prime Minister after the fascist march on Rome. However his position as PM was very unstable there were lots of problems that needed to be overcome in Italy in order for Mussolini to secure his position of leader. The source suggests that Mussolini wanted to become a dictator, however he didn't pre-plan his methods with regards to other political parties and their leaders, towards the press, and towards parliament. He was an opportunist; he made decisions as different circumstances arose. In this essay I will be looking at whether or not this is a valid interpretation. The first thing that agrees with the first part of the interpretation, that Mussolini wanted to retain power, is his definition of what a fascist state should be, fascism is based upon there being one dictator who is strong and powerful. ...read more.

Also at this time he would have been able to access many primary and a few secondary sources about Mussolini and his consolidation of power. The author also specialises in European Fascism making him quite skilled at analysing sources to do with Mussolini and Italian Fascism. This source was taken from his book 'The Rise of Fascism' and it is probably aimed at students studying Fascism and should therefore be unbiased and objective. All this suggests that this interpretation is valid. However there are also many events that disagree with the interpretation, for example the fact that Mussolini didn't get rid of the King and the Pope. This suggests that he didn't want to retain complete power. The King and the Pope were far too influential and popular within the Italian public for Mussolini to conceivably get rid of them. So instead of trying to get rid of them he tried to get them on his side, for example when he allowed religion to be taught in schools in 1922. This suggests that he was aware that he couldn't have complete power in Italy. ...read more.

Because it was written in 1967 there would be a limited number of secondary, objective sources available for him to analyse therefore giving a more narrow view on Mussolini's consolidation of power. He lastly specialised in European fascism again limiting the amount of specialised knowledge he would have on Italian Fascism and more specifically Mussolini's consolidation of power. All of this leads us to believe that the interpretation isn't very valid. In conclusion I think that although there are many arguments both agreeing and disagreeing with the interpretation, ultimately, F.L. Carsten's interpretation that, Mussolini wanted to retain power is valid, however the interpretation that he was unsure of the methods to employ towards other political parties and their leaders, towards the press, and towards parliament is invalid. Because although there was some evidence that he was unsure of what to do e.g. The Acerbo Law and the 1924 Election, these were isolated incidents at the beginning of his time in power, there were also far more events proving that he did have a plan behind his actions, he just needed the right trigger to put them into action e.g. Passing the Press Law in 1925 and Legge Fascitissime. ...read more.