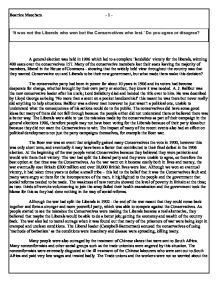 A general election was held in 1906 which led to a complete 'landslide' victory for the liberals, winning 400 seats over the conservatives 157. Many of the conservative members lost their seats leaving the majority of members, liberal in the House of Commons - showing that the widely held view throughout the country was that they wanted Conservative out and Liberals to be their new government, but what made them make this decision? The conservative party had been in power for about 10 years in 1906 and its voters had become desperate for change, whether brought by their own party or another, they knew it was needed. A. J. Balfour was the new conservative leader after his uncle; Lord Salisbury died and handed the title over to him. He was described by Lloyd George as being 'No more than a scent on a pocket handkerchief' this meant he was there but never really did anything to help situations. Balfour was a clever man however he just wasn't a political one, unable to understand what the consequences of his actions could do to the public. ...read more.

Despite this desperate need for social reform, the government had failed to provide the necessary help so far. The Liberals had started to build a new form 'New Liberalism' which stated that the government would pay more attention to the conditions of the people; they would ensure better living standards for the most needy. Despite the Liberals changing their views and fixing some of their old ideas, the Conservatives proceeded to do nothing other than an Education Act that was passed by Balfour in 1902. The Education Act although gave money to schools which would have eventually led to better education and improving 'national efficiency' it angered the non-conformists as they had to pay more taxes and yet not all schools were given money, only church schools (Church of England and Catholic); so in fact they were paying for schools that their children did not attend. Another Act passed by Balfour was the Licensing Act, this act although at the beginning was a good idea - the closing of many pubs - and the Temperance movement were happy to see many of the pubs closing - Balfour gave compensation to the pub owners and this enraged the Temperance movement again. ...read more.

Many people may not have chosen to vote liberal because of there schemes and ideas but because they believed the government needed change the 'political pendulum', reforms needed to be made and the economy needed to be fixed, many may have believed that the Liberals were able to give them what they needed; when in fact the liberals wanted to do more investigations into the poverty of the country rather than dealing with it. The idea of 'new liberalism' would've intrigued the workers who were in a desperate state of poverty, the idea that the government will help them and create more social reforms. The liberals had much more to offer than the conservatives, however the main part of the liberal campaign was negative against the conservatives and they showed little in the way of what they were going to do for the country. I believe the liberal party used the conservatives past failings as a way to gain more votes across the country and I agree that 'it was not the liberals who won but the conservatives who lost' since the people were more likely voting against the conservatives and their lack of social reform than they were because the liberals were going to make many. ...read more.