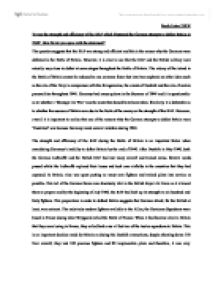 'It was the strength and efficiency of the RAF which frustrated the German attempts to defeat Britain in 1940'. How far do you agree with the statement?

Sarah Lister 13KW 'It was the strength and efficiency of the RAF which frustrated the German attempts to defeat Britain in 1940'. How far do you agree with the statement? The question suggests that the RAF was strong and efficient and this is the reason why the Germans were defeated in the Battle of Britain. However, it is clear to see that the RAF and the British military were actually very close to defeat at some stages throughout the Battle of Britain. The victory of the island in the Battle of Britain cannot be reduced to one common factor but involves emphasis on other ideas such as the role of the Navy in comparison with the Kriegsmarine, the events of Dunkirk and the role of certain personalities throughout 1940. Germany had many options in the Summer of 1940 and it is questionable as to whether a 'Strategic Air War' was the route that should have been taken. Similarly, it is debatable as to whether the success of Britain was due to the faults of the enemy or the strength of the RAF. However, overall it is important to realise that one of the reasons why the German attempts to defeat Britain were 'frustrated' was because Germany made several mistakes during 1940. ...read more.

This strategic mistake may have cause hostility between the Kriegsmarine and Hitler and delayed decisive strategic planning for Operation Sealion. Arguments between the Navy and the Army continued for months and could have been a potential reason as to why contemplating their attack had taken so long. It is also questionable as to why Hitler chose a strategic air war to attack Britain. By the summer of 1940, Germany had several options yet a route was taken to attack the RAF: the force which had kept the Luftwaffe away from the soldiers at Dunkirk. Goering was over-confident, with an arrogant belief that Britain could be brought 'down on its knees' by any simulacrum of a 'hard blow' that he directed against it, and the Luftwaffe had never been designed for strategic, sustained and especially not independent aerial warfare. The previous successes of the Luftwaffe had been of the Blitzkrieg type only and the bombers had not been designed to 'Carpet Bomb' large areas. Therefore, the impact that the Bombers could have on Britain was limited, particularly when fuel supplies only allowed brief combat. An important mistake that Goering made was to underestimate the importance of radar. ...read more.

Yet, they did not. Instead they chose to attack from the skies, where the RAF, at this stage 'ruled the skies'. They took too long to decide their attack, giving their enemy time to rearm. Instead of attacking when they were weak this lull in attack allowed Britain to strengthen their troops. When Germany did decide to attack, they withdrew from offensive when their enemy was at it's weakest and underestimated what was possibly Britain's most valuable tool: radar. It may be possible to say that the RAF played a major contributing in the eventual defeat of Germany in 1945, but the Nazi's could have had victory overall and at a much earlier stage in 1940. However, Germany's mistakes, underestimations and delays prevented this and hindered the efforts of many millions of German servicemen. The strategic decision of an attack via air may not have been the initially mistake as by the beginning of September, the Germans were winning. The downfall in Nazi strategic planning fell in the actions and tactics during the battle and therefore, whilst the RAF fought courageously and kept with technological advances, this did not serve to save Britain. Indeed, the factor, which saved Britain and consequently frustrated German attempts to defeat her, was in fact their own strategic mistakes. ...read more.