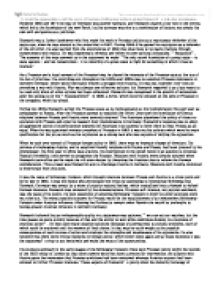 It would be impossible to tell the story of German Unification without giving Bismarck's role due prominence.

It would be impossible to tell the story of German Unification without giving Bismarck's role due prominence. Between 1862 and 1871 the map of Germany was altered radically, and Bismarck played a key role in the events, which led to the foundation of the new Reich, but his success was due to a combination of factors, not simply his own skill and genius as a politician. Bismarck was a Junker landowner who first made his mark in Prussian politics as a reactionary defender of the status quo, when he was elected to the united diet in 1847. During 1848-9 he gained his reputation as a defender of the old order. He also learned from the experiences of 1848 that ideal have to be made practical through compromises with reality. He was beginning to develop and refine his own political philosophy, "Realpolitik". The essence of this was summed up in the statement he made: "The only sound foundation of a great state... is state egoism... and not romanticism... it is unworthy of a great state to fight for something in which it has no interest." As a Prussian and a loyal servant of the Prussian king, he placed the interests of the Prussian state at the top of his list of priorities. ...read more.

He kept open many possible solutions (strategy of alternatives) to political problems, each of which could be explored until the moment of final choice. In that way he could weigh up the possible consequences of each course of action and evaluate the strengths and weaknesses of his opponents. He also believed that there were critical moments in foreign policy, which never come again and at those moments it was the statesman's duty to act decisively and make the most of the opportunities. His cautious approach in the early stages of the Schleswig-Holstein crisis kept Prussian policy within the bounds of the 1852 treaty of London so that other powers would not have a pretext for intervention, the alliance with Austria gave the impression that Prussian ambitions had been contained whereas Austrian support had been enlisted to further Prussian interests. These aspects of Bismarck's policy show the dexterity (strategy of alternatives), an approach, which he employed with great skill to manoeuvre the situation to Prussia's advantage. Danish intransigence removed the possibility of finding a compromise that was unfavourable to Prussia; Austria's defensive approach allowed Bismarck to take the initiative. He was also fortunate in facing an exceptionally favourable international situation. ...read more.

Bismarck suffered a serious diplomatic defeat when the candidature was withdrawn, but the French blunder over the guarantees issue and Bismarck 's opportunistic behaviour in editing the elms telegram enable him to turn it into a triumph. Pressure from outraged members of the French chamber pushed the government into declaring war on Prussia. The victory of Prussia, its alliance with the southern states and the unleashing of a wave of popular nationalism across Germany led to the creation of the new German Reich in 1871. This outcome highly satisfied Bismarck because it was not something, which he could have planned or predicted. It is impossible to explain the process of German unification without emphasising the role played by Bismarck. In the complex political and diplomatic situation of the 1860s both inside Prussia and in its dealings with the German states and other European powers, Bismarck displayed great diplomatic skill and dexterity. He had a clear view of his aims and the absolute conviction that his methods could be justified by the extent to which they served the interests of the Prussian state. However Bismarck was not infallible. He made mistakes in his first year in office and his diplomacy was not always successful. The Hohenzollern candidature nearly ended in humiliation for Bismarck, but he was rescued by the blunders of the French and his own opportunism. ...read more.