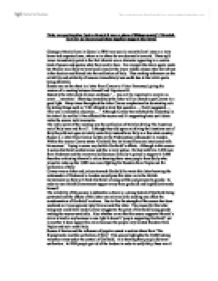 'Italy was put together just as though it were a piece of lifeless mosaic' (Mazzini). How far do the sources taken together support his views?

'Italy was put together just as though it were a piece of lifeless mosaic' (Mazzini). How far do the sources taken together support his views? Giuseppe Mazzini born in Genoa in 1805 was seen in many Italians' eyes as a very brave and respected man, where as in others he was deemed a terrorist. These split views immediately point to the fact Mazzini was a character appealing to a certain kind of person and quotes what they want to hear. For example the above quote made by Mazzini was likely to have been aimed at the lower middle classes who felt left out in the decision and forced into the unification of Italy. Thus making references on the reliability and solidarity of sources immediately less useful due to the initial quote being debatable. Source one on the sheet is a letter from Cavour to Victor Emmanuel giving his version of a meeting between himself and Napoleon III. Instantly the letter starts Cavour confesses '... you will be impatient to receive an exact ... narration.' Showing immediately the letter will be altered to put Cavour in a good light. Many times throughout the letter Cavour emphasises his dominating role by stating things such as 'I felt obliged to treat that question..., First I suggested..., This was a reasonable objection....' ...read more.

It is showing that people did want unification. In 1859 people got rid of the leaders in order to unify Italy, these are all great signs of people getting involved and wanting a unified Italy. Though in Tuscany there were rifts between the main supporters and the supporters of annexation to Piedmont. This source really goes against Mazzini as it is showing support from people and in heavy numbers also. Although there is support the source does not specifically state they are supporting unification. The reliability of this source although secondary evidence is quite good, and the basis of this judgement is relied on the agreement of this source with source 3 highlighting the opposition to unification in Tuscany. Source 3 'A new boot for old shoes'. Cavour to Victor Emmanuel. 'Push hard, it has to give way Right down the toe! It will fit you like a glove!' (Satirical cartoon by Florentine cartoonist Sanesi in Il Lampione of 15 May 1860). The source shows Cavour trying to force a boot on to Victor Emmanuel's foot, like in the title quote 'Push hard' implying the boot (Italy: also boot shaped) not fitting, the unification is being forced. The caricature also has people in the background these being Napoleon, Duchess of Parma appears to be representing the rulers that will be no more. ...read more.

By making such a statement immediately confirming Mazzini's claim in the title. Although Cavour's idea to use the people did not consult them it would at least gain the support of some of the Piedmontese population therefore gaining his popularity within his state. The idea of 'live forces' was opted for n this letter and by using this tactic Cavour and Napoleon therefore could not be lifeless like Mazzini claims. The aim of this letter was to persuade Napoleon to fight Austria and relieve Italy of Austrian troops. Cavour tried to do this by aiming to provoke Napoleon into war by accusing Austria of using France. The basis of this source further justifies Mazzini's claim by the persuasion of war and hopeful evasion of revolts yet there are points in the source disagreeing with Mazzini by stating the use of 'live forces'. The reliability of this source is good as it is an official letter from Cavour, in this type of letter there is always going to be a hint of biasness. On the whole I feel the majority of sources agreed with Mazzini's statement and were vastly backed up by evidence. These sources were generally from political figureheads discussing unification with few people opinions being expressed. Although the majority were for Mazzini's claim was the evidence to disagree with this and with more evidence Mazzini would have been disagreed with more often. WORD COUNT 1,420 ...read more.