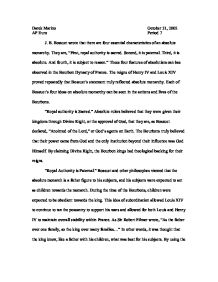 J. B. Bossuet wrote that there are four essential characteristics of an absolute monarchy.

Darek Marino October 31, 2002 AP Euro Period 7 J. B. Bossuet wrote that there are four essential characteristics of an absolute monarchy. They are, "First, royal authority is sacred. Second, it is paternal. Third, it is absolute. And fourth, it is subject to reason." These four features of absolutism can bee observed in the Bourbon Dynasty of France. The reigns of Henry IV and Louis XIV proved repeatedly that Bossuet's statement truly reflected absolute monarchy. Each of Bossuet's four ideas on absolute monarchy can be seen in the actions and lives of the Bourbons. "Royal authority is Sacred." Absolute rulers believed that they were given their kingdom through Divine Right, or the approval of God, that they are, as Bossuet declared, "Anointed of the Lord," or God's agents on Earth. ...read more.

By using the idea of paternalism, the absolute monarchs of the Bourbon dynasty were able to help keep a hold their people until the French Revolution. "Royal Authority is absolute." Absolutism for the Bourbon Kings was to have everything concerning France either dictated or approved by them. Henry IV and his adviser, the duke of Sully, helped create French absolutism. He denied the nobility to have much say in how the government was run. Unlike monarchs in the middle Ages or in the Renaissance, the nobility did not pressure him into relinquishing power. Henry and Sully also created economic stability in France by cutting taxes for the peasantry and using a mercantilist policy. Because Henry was able to directly control the French government and create prosperity in France, the stage was set for future absolute monarchs. ...read more.

However, Bossuet also adds, "Kings therefore are subject like any others to the equity of the laws...but they are not subject to the penalties of the laws." The Bourbon kings followed that idea. They generally tried to follow the laws of France, however if the laws did not suit them, they would ignore the consequences of not following them. This is the idea of absolute monarchy: That nothing holds a king back and that actions taken by the king can be excused for raison d'etat, or "Reason of state." The Bourbon Dynasty was the last set of absolute rulers in France. They fit the four characteristics that Bossuet described; they acknowledged their Divine Right, they made themselves appear to be a patriarch to their society, their rule was absolute, and they followed the laws of the land when it suited them. The French monarchy was the ideal monarchy, and defined what an absolute monarchy is. ...read more.