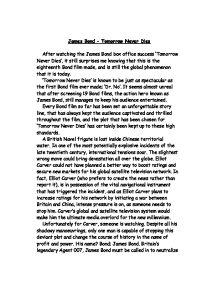 James Bond - Tomorrow Never Dies After watching the James Bond box office success 'Tomorrow Never Dies', it still surprises me knowing that this is the eighteenth Bond film made, and is still the global phenomenon that it is today. 'Tomorrow Never Dies' is known to be just as spectacular as the first Bond film ever made; 'Dr. No'. It seems almost unreal that after screening 19 Bond films, the action hero known as James Bond, still manages to keep his audience entertained. Every Bond film so far has been set an unforgettable story line, that has always kept the audience captivated and thrilled throughout the film, and the plot that has been chosen for 'Tomorrow Never Dies' has certainly been kept up to these high standards. A British Navel frigate is lost inside Chinese territorial water. In one of the most potentially explosive incidents of the late twentieth century, international tensions soar. The slightest wrong move could bring devastation all over the globe. Elliot Carver could not have planned a better way to boost ratings and secure new markets for his global satellite television network. ...read more.

But once Wai Lin's true identity emerges, Bond finds out she was just posting as a reporter, and she is undercover to investigate the suspicious circumstances behind hostilities between her country's armed forces, and the British Navy. Wai Lin does not resemble your typical Bond girl, as she specialises in martial arts; and most of the other girls only specialise in looking elegantly gorgeous. But despite this, Wai Lin is still stunning enough for James Bond's liking. One of the main assets Bond is dependable on is his gadgets. These create many of the actions scenes in the film, and enable James Bond is have an advantage over other people. As the gadgets are created by Q especially for James Bond, they are unique and distinctive. For many years, Q has come up with the most ingenious gadgets imaginable, from the tiniest electronic wizardry, to the guns and weapons that have saved James Bond's life on numerous occasions. Bond has always driven the most stylist cars imaginable. Not only do his cars stand out by their charisma and sheer power, but they have been specially modified by Q to account for any possibility. ...read more.

I think that 'Tomorrow Never Dies' and the rest of the Bond films, are not aimed at any particular audience, and can be seen and enjoyed by the whole family. Bond is known to be one of the worlds greatest romance hero's, so this would be very appealing to many women. But although he has his suave and passionate side, he is also recognized as being one of the most indestructible men in the movies. You can't really say whether his films are more for women or men, because every women wants to date him, and every man wants to be him! Before watching 'Tomorrow Never Dies', I had never before witnessed any of the 19 James Bond films made, so could never really have any opinion on them. Although I thought that the action theme wouldn't appeal to me, after watching the film I realised that although 'Tomorrow Never Dies' is an action movie, it has its amusing and solemn elements in it too, that makes the film a lot more entertaining to watch. 'Tomorrow Never Dies' is the all-time highest financially successful James Bond film in the United States, beating previous highest, 'Goldeneye'. With it's outrageous action sequels, and it's multi-faceted stunts, it is to no surprise that 'Tomorrow Never Dies' was named the best marketed motion picture of 1997. ...read more.