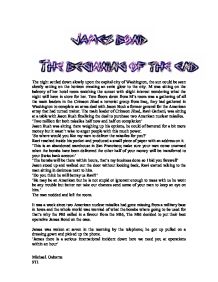 James Bond The begining of the end (creative writing)

The night settled down slowly upon the capital city of Washington, the sun could be seen slowly setting on the horizon creating an eerie glow to the city. M was sitting on the balcony of her hotel room watching the sunset with slight interest wondering what the night will have in store for her. Two floors down from M's room was a gathering of all the main leaders in the Crimson Jihad a terrorist group from Iraq, they had gathered in Washington to complete an arms deal with Jason Bush a former general for the American army that had turned traitor. The main leader of Crimson Jihad, Ravi Gathani, was sitting at a table with Jason Bush finalizing the deal to purchase two American nuclear missiles. 'Two million for both missiles half now and half on completion' Jason Bush was sitting there weighing up his options, he could of bartered for a bit more money but it wasn't wise to anger people with this much power. 'So where would you like my men to deliver the missiles for you?' Ravi reached inside his pocket and produced a small piece of paper with an address on it. 'This is an abandoned warehouse in San Francisco; make sure your men come unarmed when the bombs have been delivered the other half of your money will be transferred to your Swiss bank account' 'The bombs will be there within hours, that's ...read more.

'That's something I have been working on for quite some time now, it's only a prototype but its quite effective just face towards the test dummy over there and squeeze your shoulder blades together. James turned round faced the test dummy then slowly squeezed his shoulder blades together nothing happened for a few seconds then a giant flame shot out of the tip of the bra and melted the dummy away. 'Ingenious Q what will you think of next!' James had only taken the bra off when Q snatched it out of his hands and said, 'It still needs some work and will never be of any use to you James unless you decide to cross-dress in your missions.' Q walked over to a table, picked up a large magnum, and handed it to James. 'This is my latest creation and another one of your toys the gun has been built with twenty clips grafted into it, each clip has its own unique feature one of the clips has paintball pellets which have been designed to make it look as if the person is dead but it only knocks them out for about twenty minutes. This gun also has a scanner in the side that scans your handprint and memorises it so only you can use it and last but not least I have gone to the trouble of making this Mini bullet proof and road worthy even for you so please bring it back in one piece.' ...read more.

James woke up tied to one of the nuclear missiles next to him was the mysterious woman who had informed him of the bombs she to was tied to a bomb 'Ah Mr Bond I'm glad to see your finally awake I can commence the last stage of my plan now it seems the foolish Americans refuse to comply with our demands so the nuclear strike will go ahead as planned.' 'You really think you will get away with this?' 'Oh but of course I' will get away with this the Americans are foolish but not even them are foolish enough to try fight the Crimson Jihad'. 'What was the meaning behind the name Crimson Jihad?' 'It was to show our faith in the Muslim religion and to strike fear in the heart of the enemies but that is enough questioning for now' Ravi walked over to the control board to the far left of the room and pointed at a button 'this is where I say goodbye Mr Bond your fired' Ravi pressed the button and watched as both missiles were sent off into the horizon with both the people on them struggling for their live's. Two days later the daily star was handed to M, she looked at the front cover and sighed, it read: ENGLISH SPY MISSING IN ACTION WHILE AMERICA MOURN THEIR LOSSES. ?? ?? ?? ?? Michael. Osborne 9T1 ...read more.