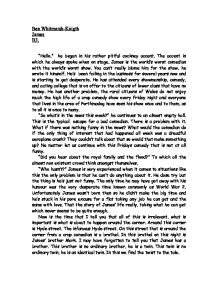 Ben Whitmarsh-Knigth James B3. "Hello," he began in his rather pitiful cockney accent. The accent in which he always spoke when on stage. James is the world's worst comedian with the world's worst show. You can't really blame him for the show, he wrote it himself. He's been failing in the business for several years now and is starting to get desperate. He has attended every showmanship, comedy, and acting college that is on offer to the citizens of lower class that have no money. He has another problem, the rural citizens of Wales do not enjoy much the high life of a crap comedy show every Friday night and everyone that lives in the area of Porthmadog have seen his show once and to them, as to all it is once to many. "So what's in the news this week?" he continues to an almost empty hall. This is the typical escape for a bad comedian. There is a problem with it. What if there was nothing funny in the news? What would the comedian do if the only thing of interest that had happened all week was a dreadful aeroplane crash? They couldn't talk about that so would that make something up? No matter let us continue with this Fridays comedy that is not at all funny. ...read more.

I suppose you want to know why he is using the brothel. I know I do. That shall remain a mystery because the man that lived at the end of the road who conveniently is an amateur camera man obsessed with surveillance and caching criminals knows for a fact that this building on Hyde street which is around the corner from James the crap comedian is a brothel. He observes the brothel every night catching the regulars (Mark) on camera. He was preparing the camera to catch once again Mark leaving the building. He waited and waited but nothing happened, this was odd as Mark was always out long before the comedy show around the corner had finished and he could see the first disappointed faces coming up the road and around the corner to the train station of the bus stop next to the railway that they called a train station. Bill the camera man was one for adventure but he couldn't do it alone. It was very late now and Mark still hadn't gone home. He had to do something or so his little mind forced him to believe. He started to think who would be awake at this time and realized that the only person would be James. OK so he is important. Bill would have to tell James that Mark had been using the brothel that was on Hyde street around the corner from the hall in which the world's worst comedian performed. ...read more.

They were temporarily stunned but were brought back to they're senses when the man simply said, "Could you �$*^ off now please!!" They creped onward and started to dread their decision to break into the wrong building and their decision to break into a brothel. When they got to the door they looked at each other and ran. They never saw each other again. Bill never saw James again. James never saw Mark again. Bill never a saw Mark again. The rather poor moral to this story is that you never know what's around the corner. It could be bad like Hyde street and the brothel. It could be better like the bad comedy show. It could be good like the bus stop that they call a train station here in Porthmadoc. Were would you rather be? In the brothel never seen again or in the bad comedy show or possibly waiting for the next train out of the area? The truth is in life we don't have the choice. We have to take what comes and hope that we turn the right corners. We should never run away from fate because nothing good will come if you do. Make the right choice before you start. Make the most of every opportunity and never run away from what you have to do. Always stand for what you believe in and fight what's around the corner if necessary and hold your head high no matter what happens or what others think!Words:1397 ...read more.