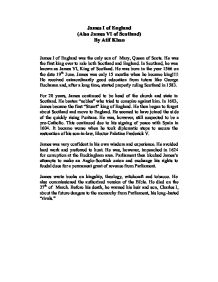 James I of England

He beaten "nobles" who tried to conspire against him. In 1603, James became the first "Stuart" king of England. He then began to forget about Scotland and move to England. He seemed to have joined the side of the quickly rising Puritans. He was, however, still suspected to be a pro-Catholic. ...read more.

He was, however, impeached in 1624 for corruption at the Buckingham area. Parliament then blocked James's attempts to make an Anglo-Scottish union and exchange his rights to feudal dues for a permanent grant of revenue from Parliament. James wrote books on kingship, theology, witchcraft and tobacco. He also commissioned the authorized version of the Bible. He died on the 27th of March. Before his death, he warned his heir and son, Charles I, about the future dangers to the monarchy from Parliament, his long-lasted "rivals." ...read more.