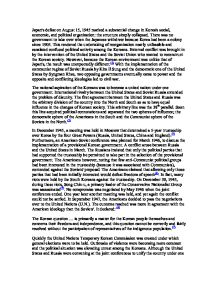 Japan's defeat on August 15, 1945 marked a substantial change in Korea's social, economic, and political organization: the structure simply collapsed. There was no government to take over when the Japanese withdrew because Korea had been a colony since 1905. This rendered the undertaking of reorganization nearly unfeasible and escalated confused political activity among the Koreans. External conflict was brought in by the intervention of the United States and the Soviet Union who wanted to reconstruct the Korean society. However, because the Korean environment was unlike that of Japan's, the result was unexpectedly different.(1) With the implementation of the communist regime of Soviet Russia by Kim Il Sung and the democratic one of the United States by Syngman Rhee, two opposing governments eventually came to power and the opposite and conflicting ideologies led to civil war. The national aspiration of the Koreans was to become a united nation under one government. International rivalry between the United States and Soviet Russia extended the problem of disunity. The first agreement between the United States and Russia was the arbitrary division of the country into the North and South so as to have equal influence in the changes of Korean society. This arbitrary line was the 38th parallel. Soon this line acquired political connotations and separated the two spheres of influence; the democratic sphere of the Americans in the South and the Communist sphere of the Soviets in the North.(2) In December 1945, a meeting was held in Moscow that determined a 5-year trusteeship over Korea by the four Great Powers (Russia, United States, China and England).(3) Furthermore, an American-Soviet conference was planned for March 1946, to discuss the implementation of a provisional Korean government. A conflict arose between Russia and the United States in March. The Russians insisted that only the political parties that had supported the trusteeship be permitted to take part in the selection of the provisional government. ...read more.

In a democratic society the opinion of the majority of the population is what is followed. The Northern government also had justified their control over the whole peninsula. They had been recognized and had already established laws and order in the North that could be seen in their growing economy. To break this structure might spiral the North into economic hardships again. Of course this misunderstanding could lead to conflict between the United States and Soviet Russia. Therefore, after the governments were founded, the two countries removed their troops from Korea, having completed their duty to construct a government that could rebuild the economic and social structure that had collapsed only three years earlier.(18) The Rise of Kim Il-sung: Leader of The Democratic People's Republic of Korea The leader of The Democratic People's Republic of Korea, Kim Il-sung, took his name from a legendary Korean guerilla who, like himself, had fought the Japanese.(19) After defeat in Manchuria by the Japanese, Kim joined the Soviet army. In the Battle of Stalingrad (August 1942 - February 1943), Kim was a captain who served with honor for the Soviets. The Soviets recognized his contributions and when Kim Il-sung returned to Pyongyang, Korea, he was recognized as a "national hero". On October 15, the North Korean Bureau was instituted and Kim Il-sung became the First Secretary of the 4,530 member group. Once in office he started to sway the Koreans to follow the ideals of communism by forming regional Communist factions. Kim's persuasiveness led to violent disturbances between opposing political factions in North Korea. The deaths from these discords amounted to more than 1,000. Kim Il-sung supported the callous removal of nationalists from North Korea for the reason that they opposed the system and if he were to be in an election, the nationalists may ruin his chance to govern Korea.(20) As a result the North Koreans lived under an "atmosphere of fear... ...read more.