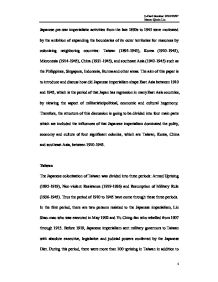 Japanese pre-war imperialistic activities from the late 1890s to 1945

Japanese pre-war imperialistic activities from the late 1890s to 1945 were motivated by the ambition of expanding the boundaries of its outer territories for resources by colonizing neighboring countries: Taiwan (1895-1945), Korea (1910-1945), Micronesia (1914-1945), China (1931-1945), and southeast Asia (1942-1945) such as the Philippines, Singapore, Indonesia, Burma and other areas. The aim of this paper is to introduce and discuss how did Japanese imperialism shape East Asia between 1910 and 1945, which is the period of that Japan has regression in many East Asia countries, by viewing the aspect of militaristic/political, economic and cultural hegemony. Therefore, the structure of this discussion is going to be divided into four main parts which are included the influences of that Japanese imperialism dominated the polity, economy and culture of four significant colonies, which are Taiwan, Korea, China and southeast Asia, between 1910-1945. Taiwan The Japanese colonization of Taiwan was divided into three periods: Armed Uprising (1895-1919), Non-violent Resistance (1919-1936) and Resumption of Military Rule (1936-1945). Thus the period of 1910 to 1945 have come through these three periods. In the first period, there are two persons resisted to the Japanese imperialism, Lin Shao-mao who was executed in May 1902 and Yu Ching-fan who rebelled from 1907 through 1915. Before 1919, Japanese imperialism sent military governors to Taiwan with absolute executive, legislative and judicial powers conferred by the Japanese Diet. During this period, there were more than 100 uprising in Taiwan in addition to tens of thousands people dead. ...read more.

Therefore, because the reaction became more and more enthusiastic, anti-Japanese attitudes were becoming main basis for growing national consciousness. The second periodization of that Korea was ruling under Japanese Empire was 1920-1935. As China became new Japanese periphery since 1930s, Korea and Taiwan were less tightly. Thus Japanese imperialism carried out the assimilation in Korea. Similar patterns of educational goal and practice were employed by the Korea Government-General since Japan annexed Korea in 1910. In 1911 the Korea Education Rescript was legislated, stressing cultivating in Korean children qualities of Japanese nationals and diffusing the national language. The same emphasis on ethics education, as the Imperial Rescript on Education stated, and Japanese teaching was employed as the educational goal in Korea as well as in Taiwanese education. Revision also was made several times. The third revision in 1938 abolished Korean language teaching, leaving it voluntary and stressed the teaching of imperialization/Japanization in the curriculum contents. From 1930s to 1945, Korea was colonized in an imperial subjectification period. Militarism became a fashion all around the world. Therefore, more and more roads, railroads, telegraph lines and factories were built in order to supply sufficient resources that Japanese used during World War II. Even some Koreans were sent to Japan to work in factories. In a word, Korea was the subordinate of imperial Japan between 1910 and 1945. China As we all know, for nearly a hundred years China has been a semi-colonial country jointly dominated by several imperialist powers and Japanese imperialism was one of them. ...read more.

The 600 Malay and 45,000 Indian troops were assembled by the Japanese and urged to transfer their allegiance to the emperor of Japan. Many refused and were executed, tortured, imprisoned, or sent as forced laborers to Tailand or Sumatra. Serious disruption of not only the economy but the whole fabric of society marked the occupation years in Singapore. Food and basic materials were in short supply since the allocative trade that Singapore depended on to provide most goods was severely curtailed by the war. But because of the time that Singapore was regressed was not the long as that Japanese did in Taiwan, Korea and China, the economy and civil system was rebuilt quickly after Japan surrendered. And since 1980s, Singapore became one of the four richest countries with HongKong, Korea and Japan in East Asia. To sum up, Japanese imperialism influenced almost all the East Asia deeply between 1910 and 1945. On one hand, Japanese brutal regression destroyed the industries, economies and social system of many poor countries such as Taiwan, Korea, China and Southeast Asia countries. They killed millions of people and changed the order of those poor countries' society, which was the intention that Japanese wished to shaped East Asia as its territory. On the other hand, to some positive extent, Japanese had developed East Asia's cultural and industrial technology and brought many investments to East Asia more or less, which pushed other countries forward. But anyway, the activities all Japanese imperialism did for other East Asia countries were cruel and harmful and people who lived or used to be lived in those under-colonized countries will not forget that huge disaster for them forever. ...read more.