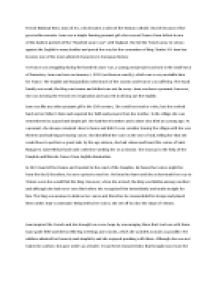 ï»¿French National Hero, Joan of Arc, who became a Saint of the Roman Catholic Church because of her great achievements. Joan was a simple farming peasant girl who rescued France from defeat in one of the darkest periods of the "Hundred years' war" with England. She led the French army to victory against the English in many battles and paved the way for the coronation of King Charles VII. Joan has become one of the most admired characters in European history. As France was struggling during the hundred years' war, a young peasant girl was born in the small town of Domrémy. Joan was born on January 6, 1412 (not known exactly), which was a very unstable time for France. The English and Burgundians ruled much of the country and France was suffering. The Royal Family was weak, the King was insane and defeat was not far away. Joan was born a peasant, however, she was to bring the French new inspiration and succeed in driving out the English. ...read more.

Joan inspired the French and she brought on a new hope by encouraging them that God was with them. Joan spoke little and did not like big meetings and crowds, which she avoided as much as possible. Her soldiers admired her honesty and simplicity and she enjoyed speaking with them. Although she was not trained in warfare, she gave orders as a leader. It was these characteristics that brought success in the battles fought. Guided by her voices, she led the French army in a momentous victory at Orleans, which had been under siege for eight months. The fighting was furious and inspired by Joan, as the French Army pushed the English out of Orleans. The battle Joan became known as the "Maid of Orleans". She continued to lead the army in a victorious battle in Patay, and succeeded in at last opening the road to Rheims where the coronation for King Charles the VII was held. ...read more.

She was soon sold to the English and brought to Rouen were she was held captive. Her soldiers grieved yet King Charles VII made no effort to come to her rescue. In the court of Rouen, Joan was tried for witchcraft and heresy. After months of interrogation, Joan was tricked into confessing. However she quickly retracted her confession and was then condemned. Her judges declared her visions Satanic and on May 30, 1431 Joan was burned at the Stake in the marketplace in Rouen. However, that was not the last of Joan. In 1456 a second trial was held and she was declared innocent of the charges against her. In 1475, King Louis XI signed a treaty with England and the Hundred years' war was finally over. Joan's place in history is assured. She never lived to see the victory she earned; however, as the years went by, Joan became known as France's national heroine and statues and monuments have been put up all over France in her memory and honor. In 1920, Joan was canonized and became known as Saint Joan of Arc, a title she well deserved. ...read more.