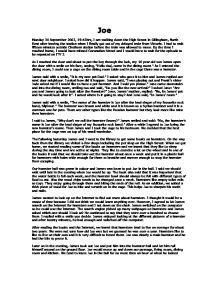 Joe Monday 30 September 2002, 19:45hrs, I am walking down the High Street in Gillingham, North Kent after leaving the station when I finally got out of my delayed train from Victoria. I had to wait fifteen minutes outside Chatham station before the train was allowed to move. By the time I reached home, I would have missed Coronation Street and I would have to wait for the episode to be repeated on ITV 2. As I reached the door and about to put the key through the lock, my 10 year old son James open the door with a smile on his face, saying, "Hello dad, come in the dining room." As I entered the dining room, I could see a cage on the dining room table and in the cage there was a hamster. James said with a smile, "It is my new pet Dad." I asked who gave it to him and James replied our next door neighbour. I asked how did it happen. James said, "I was playing out and Frank's sister Jade asked me if I would like to have a pet hamster. And I said yes please." June came downstairs and into the dining room, smiling too and said, "Do you like the new arrival?" ...read more.

Sometimes James would take Joe in the garden with his friends and let him move about in his ball while he played with his friends. James even asked if we would let him have a dog like his friend Peter who lives seven houses away from us. I said no way because I did not want to be the one to lose two hours sleep getting up in the mornings to walk the dog and to do the same thing before bedtime. Also it is simply too much work looking after a dog. After a week, it was clear to me that if I did not take responsibility in looking after Joe, I would not know for sure, if he had a full bottle of water, his bowl was full of food and his cage has been cleaned. June clearly was not interested in taking the responsibility of looking after Joe even though she agreed for James to have the pet in the first place. Every Friday was cleaning day for the hamster cage and I would always make a point of getting James to help clean the cage before he had his supper. While we clean the cage, we would put Joe in his ball and let him move freely on the ground floor. ...read more.

I asked James, "Where would you like him to be buried?" and James replied in the garden pointing to a spot. James got the small shovel and dug a big and deep enough hole for Joe. I put him in the hole and James covered him up and put a stick in the middle of the patch to show where Joe laid to rest. As we went inside the house, I asked James if he would like another hamster and he replied not right now. James asked if it is ok for him to play out with his friends and I replied I have no objections but check with your Mum that she is happy for you to play out and James said thanks. As James was walking towards the main reception where his Mum was, he turned round and said Joe was with us for nine months so he must have been one year and three months when he first arrived. I replied that sounds about right. James also said I still have three gold fish and I replied with a smile you sure have. James asked his Mum if he could play out and she agreed. I went to the main reception and looked through the window watching James playing on his skateboard with his friends and said to June, James took the news better then I thought. By: John Carlson ...read more.