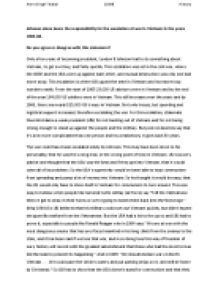 'Johnson alone bears the responsibility for the escalation of war in Vietnam in the years 1965-68.' Do you agree or disagree with this statement?

﻿Amrit Singh Thabal 16MB History Johnson alone bears the responsibility for the escalation of war in Vietnam in the years 1965-68. Do you agree or disagree with this statement? Only a few years of becoming president, Lyndon B Johnson had to do something about Vietnam, to get a victory; and fairly quickly. This escalation was set in the cold war, where the USSR and the USA were up against each other, and mutual destruction was only one bad move away. This escalation is where LBJ upped the ante in Vietnam and increase troop numbers vastly. From the start of 1965 23,000 US advisors were in Vietnam and by the end of the year 184,000 US soldiers were in Vietnam. This still increases over the years and by 1968, there are nearly 525,000 US troops in Vietnam. Not only troops, but spending and logistical support increased, therefore escalating the war. For this escalation, stalemate theorists blame a weak president (LBJ) for not backing out of Vietnam and for not being strong enough to stand up against the people and the military. But post-revisionists say that it?s a lot more complicated than one person and his weaknesses, it goes back 30 years. The war could have been escalated solely by Johnson. ...read more.

In 1961, the Taylor-Rostow report was given published, talking about the VC operations in South Vietnam. At this time LBJ was the vice-president, so he would have read it. In 1965, there were many protests and riots. LBJ carried on with bombing and operations, so he ignored the warning signs and the people of his own country. 1964 also was a time that led on to the why LBJ had to escalate throughout 1965-68. LBJ lied to the American people to escalate the war, in the form of the Gulf of Tonkin incident, which may have been a set up. At most, it was a minor attack, where no US soldiers died and some NVA soldiers were killed when the US fired back. Also in the 1964 election, where LBJ perceived himself to the American people to be the peace candidate, so not to use extreme force on Vietnam. Rather than the war candidate, Barry Goldwater, who said he would use every means necessary, so maybe even nuclear bombs. But what the people didn?t know is that LBJ made a promise to the JCS, which was ?Let me win this election and I?ll give you your war.? The manipulation of the South Vietnamese government backfired on LBJ, when Big Minh wanted no help from the US and Air Marshall KY failed. ...read more.

Also napalm was dropped, burning and killing lots of people. So this would have enraged the VC, so LBJ would?ve needed to escalate to keep the VC under control. They were also trying to keep up morale and give good stories back home, so lies were made and they were trying to look good. In conclusion, I think to some extent, that it wasn?t just LBJ?s fault for the escalation of the Vietnam War. Even though it looked like it was solely him, he wasn?t the brains behind the plans, he only agreed to what he believed to be right because he didn?t know and thought that his advisors and the military should?ve known what to have done. But because the administration was the same, there were no new ideas and they, for the most part, stuck to the same plan. Also the VC and NVA made it impossible for LBJ not to escalate because they kept on attacking and putting the US under pressure all the time. Johnson?s own soldiers also made it hard on LBJ. They thought a large kill count would impress the nation and LBJ, but it backfired, especially with the hippie movement. So I think that Lyndon B Johnson had no choice and had to escalate the war in Vietnam in the years 1965-68 because of other people?s actions and advice. ...read more.