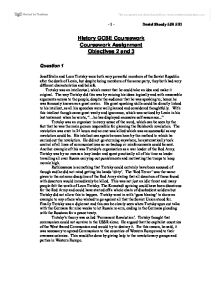 Josef Stalin and Leon Trotsky were both very powerful members of the Soviet Republic after the death of Lenin, but despite being members of the same party, they both had very different characteristics and beliefs.

History GCSE Coursework Coursework Assignment Objectives 2 and 3 Question 1 Josef Stalin and Leon Trotsky were both very powerful members of the Soviet Republic after the death of Lenin, but despite being members of the same party, they both had very different characteristics and beliefs. Trotsky was an intellectual, which meant that he could take an idea and make it original. The way Trotsky did this was by voicing his ideas logically and with reasonable arguments across to the people, despite the audience that he was speaking to; hence he was famously known as a great orator. His great speaking skills could be directly linked to his intellect, as all his speeches were well planned and considered thoughtfully. With this intellect though came great vanity and ignorance, which was noticed by Lenin in his last testament when he wrote, "...he has displayed excessive self assurance..." Trotsky was an organiser in every sense of the word, which can be seen by the fact that he was the main person responsible for planning the Bolshevik revolution. The revolution was over in 24 hours and no one was killed which was as successful as any revolution could be. His intellect can again be seen here by the method to which he carried out the revolution. He did not go storming anywhere, he systematically took control of all lines of communications so no backup or reinforcements could be sent. Another example of this was Trotsky's organisation as a war leader of the Red Army. Trotsky was by no means a lazy leader and spent practically all of his time as leader travelling all over Russia carrying out punishments and motivating the troops to keep morale high. Ruthlessness is something that Trotsky could certainly have been accused of though and he did not mind getting his hands 'dirty'. The 'Red Terror' was the name given to the extreme discipline of the Red Army stating that all deserters of those found with deserters would immediately be killed. ...read more.

Stalin set up the 'Treaty of Moscow' which gave more land to Russia and the people in turn benefited from the housing and farming that could be achieved on that land. Stalin's policy of 'scorched earth' was successful in it's objectives, as with lack of supplies to the Germans, they soon had to retreat out of Russia. Most importantly Stalin won Russia the war, resulting in the Russian people being saved from death. One of Stalin's biggest achievements was the industrialisation of Russia. In the 10 years when the main part of this process was taking place steel production in Russia rose by an impressive 400% and coal by 350%. Stalin also looked even more impressive at that time because of the problems that were occurring all over the world for other countries. The 'Wall Street Crash' meant that unemployment was soaring in places like Britain, where at one point 30% of the country were unemployed. As Russia had a closed economy this did not affect it and unemployment was almost non-existent. This made people associate 'Communism' with prosperity rather than the poorer apparently more advanced countries of the West. All these things were very beneficial to the Russian people as unemployment was low and the economy was at it's pinicle. This rapid industrialisation however meant that there were people who did not acquire the working conditions that they would have required. People were often taken off the street for commiting no offence and used to build major public works like the Belamor Canal. The 'slave' workers were treated like animals, working extremely long hours, in confined spaces completely covered in dirt. After all of the work the canal did not even prove to be a success as it was too shallow and froze over in winter. Another of Stalin's proposals which did not benefit the Russian people was 'Collectivisation'. Collectivisation meant that no matter how hard, or how lazy you were you received the same amount of pay at the end of the working day. - 1 - Daniel Sheedy 5JR 5H1 ...read more.