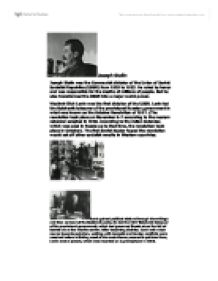 Joseph Stalin Joseph Stalin was the Communist dictator of the Union of Soviet Socialist Republics (USSR) from 1929 to 1953. He ruled by terror and was responsible for the deaths of millions of people. But he also transformed the USSR into a major world power. Vladimir Ilich Lenin was the first dictator of the USSR. Lenin led the Bolshevik takeover of the provisional Russian government in what was known as the October Revolution of 1917. (The revolution took place on November 6-7 according to the modern calendar adopted in 1918. According to the Julian Calendar, which was used in Russia up to that time, the revolution took place in October). The first Soviet leader hoped the revolution would set off other socialist revolts in Western countries. ...read more.

Russia became a republic. Imperial Russia's Tsarist rulers had entered World War I to win territories and influence in Eastern Europe and the Balkans. Instead, the stresses of war broke the rigid Tsarist state, with Russian troops surrendering en masse. The war became immensely unpopular, and the regime with it: few were ready to defend it against revolution. Power passed to a provisional government drawn from the old Duma (parliament). Press freedom, replacement of police by popular militias, and other liberal reforms were passed; in the wave of enthusiasm, political exiles were invited back to Russia, including the radical Communist Bolsheviks. The veteran Bolshevik Vladimir Ilich Lenin returned from Switzerland with the help of the Germans, who hoped that he would weaken Russia militarily. ...read more.

caught the government ministers in the Winter Palace; the famous "storming of the Winter Palace" was in fact the seizure of an undefended and virtually unguarded building. Lenin and his Bolshevik clique legitimized their coup by linking it to a stage-managed Bolshevik-dominated Congress of Soviets. The discipline and unscrupulousness of the Bolsheviks had won them power. The provisional government had proposed elections for a new assembly in late 1917; Lenin had seen that the Bolsheviks must act before this democratically elected government convened, but once in power, he allowed the elections to proceed. In the November 1917 polls, Bolshevik candidates won just under 25 per cent of the vote, while the moderate socialists polled over 40 per cent. Lenin sent his loyal troops to close down the constituent assembly the day after it convened. Russia was about to enter a bloody civil war, from which it would emerge into Leninist and Stalinist tyranny. ...read more.