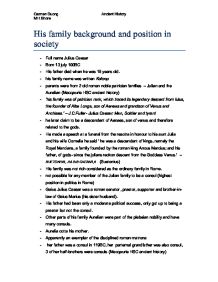 His family background and position in society - Full name Julius Caesar - Born 13 july 100BC - His father died when he was 15 years old. - his family name was written K????? - parents were from 2 old roman noble patrician families - Julian and the Aurelian (Macqaurie HSC ancient history) - 'his family was of patrician rank, which traced its legendary descent from Iulus, the founder of Alba Longa, son of Aeneas and grandson of Venus and Anchises.' - J.C.Fuller- Julius Caesar: Man, Soldier and tyrant - he later claim to be a descendent of Aenaes, son of venus and therefore related to the gods. - He made a speech at a funeral from the resotra in honour to his aunt Julia and his wife Cornelia he said ' he was a descendant of kings, namely the Royal Marcians, a family founded by the roman king Ancus Marcius; and his father, of gods- since the julians reckon descent from the Goddess Venus.' - SUETONIUS, JULIUS CAESAR,6 (Suetonius) - His family was not rich considered as the ordinary family in Rome. - not possible for any member of the Julian family to be a consul (highest position in politics in Rome) ...read more.

Early Life - At 15 his father died this impacted on young Caesar. - Believed that his child and teenage- hood was in a very violent period in Rome's history. - Period of civil war in Rome when Gaius Marius and Lucius Cornelius Sulla started - There were mass flood of cheap labour resulting many roman workers unemployed. - Believed that these events have shaped his thoughts about the Roman state - At young age he realised that money was a key thing for a successfully society. - He also believed that marrying into a more distinguished family. - through this marriage is he able to strengthen relationship with politicians. - Believed that his mother was the greatest influence in this early age - Caesar followed the traditional Roman practice of conducting some prosecutions in order to gain political attention - Ambitions - His aim was to Diagram from JULIUS CAESAR- Macquarie Revision Guide. - According to Plutarch, Caesar's main effort was to become the first power in the state and the greatest soldier. His paths to power; priesthoods; Marian connections; political alliances and marriages Priesthood - In 84 B.C Marius and Cinna appointed young Caesar priest (Macqaurie HSC ancient history) ...read more.

- It was this marriage that Sulla forced Caesar to divorce but he refused to and was in hide - 'after Sulla had seized power, he wanted to male Caesar divorce his wife Cornelia, the daughter of Cinna, who had previously held the entire government in his hand, but he could not persuade Caesar to do this either by promises or by intimidation, and so he confiscated her dowry.' Plutarch- life of Julius Caesar (Plutarch) - After the death of Cornelia in 68 B.C. because of giving birth to her daughter Julia, Caesar married Pompeia, the granddaughter of Sulla. - This marriage was a political marriage, Caesar wanted to gain support from the optimates that's why he married her - In 61 BC, Caesar divorced pompeia and married Calpurnia pisonis, she was the great-granddaughter of a lieutenant of Lucius Cassius Longinus - This was the third and last marriage Julius Caesar had. Reference C. Heaton, C. Posratching. (2010). julius Caesar. Retrieved jan 30, 2011, from UNRV history: http://www.unrv.com/fall-republic/julius-caesar.php Macqaurie HSC ancient history. In marriages (p. 75). McManus, B. F. (2009 , august ). JULIUS CAESAR: HISTORICAL BACKGROUND. Retrieved jan 30, 2011, from The College of New Rochelle: http://www.vroma.org/~bmcmanus/caesar.html Plutarch. Life of Julius Caesar . In Plutarch. His early political career to 60 B.C. - Timeline of his early political achievements (Macqaurie HSC ancient history) ?? ?? ?? ?? Carmen Duong Ancient History Mr t.Shore ...read more.