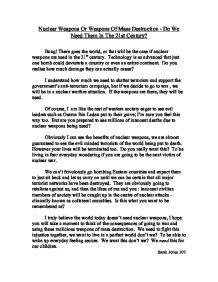 just one bomb could devastate a country oreven an entire continent. Do you realise how much damage they can actuallycause?

Nuclear Weapons Or Weapons Of Mass Destruction - Do We Need Them In The 21st Century? Bang! There goes the world, or that will be the case if nuclear weapons are used in the 21st century. Technology is so advanced that just one bomb could devastate a country or even an entire continent. Do you realise how much damage they can actually cause? I understand how much we need to shatter terrorism and support the government's anti-terrorism campaign, but if we decide to go to war , we will be in a nuclear warfare situation. If the weapons are there, they will be used. Of course, I am like the rest of western society eager to see evil leaders such as Osama Bin Laden put to their grave; I'm sure you feel this way too. ...read more.

Is this what you want to be remembered as? I truly believe the world today doesn't need nuclear weapons, I hope you will take a moment to think of the consequences of going to war and using these malicious weapons of mass destruction. We need to fight this injustice together, we want to live in a perfect world don't we? To be able to wake up everyday feeling secure. We want this don't we? We need this for our children. For the small percentage of mankind who would survive a nuclear war, I can't even begin to describe what the world we would live in would be like. When the first nuclear bombs were dropped in World War 2, in the Japanese cities of Hiroshima and Nagasaki, it was the most destructive forces that had ever been used in a single raid. ...read more.

If we as a nation stick together I'm sure we can come up with a plan to extinguish terrorism without going to war. In an idealistic world, every country would destroy all their weapons of mass destruction. However our world is far from ideal, if all the decent countries destroyed their weapons, it is certain that the terrorist countries would pretend to have exterminated theirs and then, as soon as our backs were turned... Boom! They would drop a nuclear bomb. We as a society are in a catch twenty two situation; therefore, we need to stick together and be against nuclear weapons in the 21st century. Think, would going to war be worth it? Would you want to live in a post nuclear world? Sarah Jones 10T ...read more.