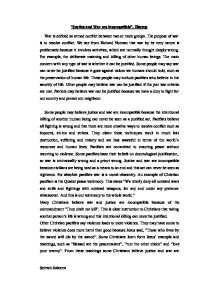 &quot;Justice and War are incompatible&quot;. Discuss War is defined as armed conflict between two or more groups. The purpose of war is to resolve conflict.

"Justice and War are incompatible". Discuss War is defined as armed conflict between two or more groups. The purpose of war is to resolve conflict. We see from Richard Norman that war by its very nature is problematic because it involves activities, which are normally thought deeply wrong. For example, the deliberate maiming and killing of other human beings. The main concern with any type of war is whether it can be justified. Some people may say war can never be justified because it goes against values we humans should hold, such as the preservation of human life. These people may include pacifists who believe in the sanctity of life. Other people may believe war can be justified if the just war criteria are met. Patriots may believe war can be justified because we have a duty to fight for our country and protect out neighbour. Some people may believe justice and war are incompatible because the intentional killing of another human being can never be seen as a justified act. Pacifists believe all fighting is wrong and that there are more creative ways to resolve conflict such as boycotts, sit-ins and strikes. ...read more.

Jesus did not use violence at his arrest in self-defence. So war and justice are incompatible because we should love our enemy and we are not loving them by killing them. However others and myself may disagree and believe justice and war are compatible especially in the case of self-defence. Elizabeth Anscombe argues pacifism is mistaken because it denies a person of self-defence and places unacceptable and extra-ordinary limits on an individual's rights. It is also dangerous because it encourages the belief that all killing is wrong and makes no distinction between legitimate and illegitimate killing or justified and unjustified killing. Louis Pojman asks what is a right if we do not have the right to defend it? Pacifists claim war and justice are incompatible because of Jesus' teaching of "turn the other cheek". However, it is one thing to offer your own cheek, but quite different to offer your neighbour's cheek. Also Jesus used violence to fight for what he thought was right. He fought for justice; therefore we see justice and war are compatible. For example, he used violence to challenge those who misused the temple as a place to make money. ...read more.

Only the force necessary to achieve the aim of war must be used. This rules out the use of nuclear weapons etc. Finally there must be discrimination over targets. Civilians must not be killed. Jus ad bellum considers when it is right to go to war. The war must have a just cause. Jus in bello considers how wars should be fought. This is very difficult to decide in our modern world because of the weapons available and the destruction they cause. Justice and war are compatible if the just war criteria are met and the principle of proportionality is implemented. Although we see this is difficult to meet in the modern world, especially because of the introduction of nuclear weapons as they cause mass destruction. In my opinion the use of modern weapons, which can cause devastation, can never be justified. This is because innocent civilians are killed and cities are usually bombed causing strain on resources, such as water. However, I do think justice and war are compatible in certain circumstances, such as an attempt to overthrow a dictator. In my opinion justice and war are compatible, but in modern society I do not think war can be justified because of the weapons used. ?? ?? ?? ?? Sehrish Saleemi ...read more.