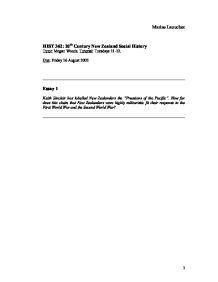 Marine Laouchez HIST 362: 20th Century New Zealand Social History Tutor: Megan Woods. Tutorial: Tuesdays 11-12. Due: Friday 16 August 2002 Essay 1 Keith Sinclair has labelled New Zealanders the "Prussians of the Pacific". How far does this claim that New Zealanders were highly militaristic fit their response to the First World War and the Second World War? The two World Wars, and especially the Second one, are said to be "total wars", which implies that countries were fully engaged in them, with all the means they could control. New Zealand, small country at the antipodes of the world, had to face it as well. Would its behaviour confirm Keith Sinclair's opinion of New Zealanders as "the Prussians of the Pacific", i.e. them being highly militaristic? Indeed the New Zealand society was asked to contribute to the war effort, led by a state eager to rationalize its warfare organisation. However, there is a difference between answering quickly and efficiently to a war declaration and organising and thinking life in constant reference to war. In the first part it is necessary to look at the different definitions of "militarism". Indeed it will imply that the New Zealand response to World War One and Two can be seen as militaristic. ...read more.

The Home Front was also very committed. Social unity was promoted. After 1939, workers and management staff, especially in industries like woollen mills, clothing or boot making, were asked to do more. Rationing was accepted. Many associations affirmed their support to the war, from the New Zealand Bowling Association to the Associated Chambers of Commerce. There was a real exclusion of those who did not volunteer. The associations related to warfare became very active. In 1905, the National Defence League counted already more than 7,000 members. From 1936, the Defence League is recorded as educating public opinion towards increased defence measures6. The Home Guard, composed with voluntary units, totalled 123,242 men between 1949 and 19437. The Boy Scout Movement, created before World War One, is also part of this civilian militaristic organisation. Besides, women played a big role: they replaced men who left for the front in the industry, notably during World War Two. They, with children, demonstrated in the streets to push men to volunteer. They were on the Front Line as nurses. The newspapers supported this excitation. They exhorted people to take part in it, and most of them were conscriptionists. Moreover, taking part in war also consisted in giving money: to the state, for the aircraft or for the London children during the Second World War. ...read more.

Yet he never really seems to consider New Zealanders as highly militaristic. His counterarguments are: there was never a serious extension of the national frontiers, which contradicts the first aspect of the definition of militarism; there were no great victories; and no boasting about victories, which implies that the citizen and government had never been conditioned enough to think only regarding militaristic success. In conclusion, for him, the New Zealanders are not "the Prussians of the Pacific". In some aspects, the New Zealand response to the World Wars could justify their nickname of "Prussians of the Pacific". Indeed both the government, by using what it could control - legislation, propaganda, state finance, even repression - and the civil society - women, children, association, men by volunteering - had a rather militaristic behaviour during the wars, organising their lives around it. Nonetheless, New Zealand pragmatism prevented it from being highly militaristic: diplomacy and domestic policy remained important, so did opposition to war, and organisation was never optimally rationalized. This conclusion would thus tend to refute Sinclair's opinion. However, New Zealanders could be the "Prussians of the Pacific" for another reason: it has been said that Gallipoli was a "national 'baptism of blood'"18. Just as the Prussians became Germans on the battlefields of Sadowa in 1866 and against France in 1871, the two World Wars probably created a sense of nationhood in New Zealand. ...read more.