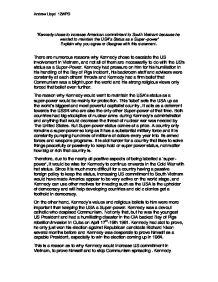 'Kennedy chose to increase American commitment to South Vietnam because he wanted to maintain the USA's Status as a Super-power' Explain why you agree or disagree with this statement.

'Kennedy chose to increase American commitment to South Vietnam because he wanted to maintain the USA's Status as a Super-power' Explain why you agree or disagree with this statement. There are numerous reasons why Kennedy chose to escalate the US involvement in Vietnam, and not all of them are necessarily to do with the US's status as a Super-Power. Kennedy had pressure on him for his humiliation in his handling of the Bay of Pigs incident, his backroom staff and advisers were constantly at each others' throats and Kennedy had a firm belief that Communism was a blight upon the world and his strong religious views only forced that belief even further. The reason why Kennedy would want to maintain the USA's status as a super-power would be mainly for protection. This 'label' sets the USA up as the world's biggest and most powerful capitalist country, it acts as a deterrent towards the USSR who are also the only other Super-power at that time. ...read more.

This is a reason as to why Kennedy would increase US commitment in Vietnam, to prove himself and to stop Communism spreading. Kennedy believed in the Domino Theory. This was where Communism in a Communist country would spread out of that country and onto other countries, eventually making them fall to Communism. This were particularly a worrying prospect for Kennedy, Laos had fallen several weeks before Kennedy's inauguration, January 20th 1961, and now Vietnam looked a likely country that would fall next. But the worrying thing was also that countries of key American interest were at risk (according to the theory) of falling to Communism. Countries like The Philippines and Australia were at a potential threat from Communism. The USA also had reasons for increasing commitment that was not to do with Communism prevention or because it wanted to keep its Super-Power status. The USA was capitalist, and its economy thrived when the country was at war, so long as that war was far from home, big businesses that specialised in military equipment, vehicles etc would have needed a war or some USA military involvement in a country to make a healthy business. ...read more.

In Conclusion, Kennedy seems to have increased US involvement and commitment in Vietnam because he wanted it to become a stable country with minimum Communist influence. Perhaps he thought that this would lead as an example to the rest of the world, to show what America could really do in order to help old colonised countries, which then would be the USA increasing and maintaining its Super-power status. However, I would have to say that i disagree with the statement. Kennedy's main reason I believe of increasing US involvement was to contain Communism, but in doing this, America also showed the world what its stance on Communism was- that it would not stand idly by while what it saw as a threat to its very constitution was left to ravage the world. So it can be said that Kennedy did also increase US involvement because of wanting to maintain that status, but while that might be partly true, I find it more likely that the Super Power status was a less pressing thought and indeed maybe an advantage that came from showing an aggressive stance against Communism. ?? ?? ?? ?? Andrew Lloyd 12WPD ...read more.