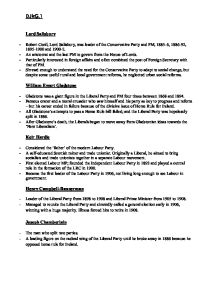 Lord Salisbury - Robert Cecil, Lord Salisbury, was leader of the Conservative Party and PM, 1885-6, 1886-92, 1895-1900 and 1900-2. - An aristocrat and the last PM to govern from the House of Lords. - Particularly interested in foreign affairs and often combined the post of Foreign Secretary with that of PM. - Shrewd enough to understand the need for the Conservative Party to adapt to social change, but despite some useful rural and local government reforms, he neglected urban social reforms. William Ewart Gladstone - Gladstone was a giant figure in the Liberal Party and PM four times between 1868 and 1894. - Famous orator and a moral crusader who saw himself and his party as key to progress and reform - but his career ended in failure because of the divisive issue of Home Rule for Ireland. - All Gladstone's attempts to pass a Home Rule bill failed; and the Liberal Party was hopelessly split in 1886. - After Gladstone's death, the Liberals began to move away from Gladstonian ideas towards the 'New Liberalism'. Keir Hardie - Considered the 'father' of the modern Labour Party. - A self-educated Scottish miner and trade unionist. Originally a Liberal, he aimed to bring socialists and trade unionists together in a separate Labour movement. - First elected Labour MP; founded the Independent Labour Party in 1893 and played a central role in the formation of the LRC in 1900. - Became the first leader of the Labour Party in 1906, not living long enough to see Labour in government. Henry Campbell-Bannerman - Leader of the Liberal Party from 1898 to 1908 and Liberal Prime Minister from 1905 to 1908. - Managed to reunite the Liberal Party and shrewdly called a general election early in 1906, winning with a huge majority. Illness forced him to retire in 1908. Joseph Chamberlain - The man who split two parties. ...read more.

John Maynard Keynes - Published his book in 1936 whilst Professor of Economics at Cambridge. - Believed that governments should prevent disruptive slumps and booms by using government spending, interest rates and taxation. Argued that governments should spend more than their income in times of slump and pull back in periods of inflation. - Keynesianism contradicted orthodox economic principles and had little impact in the 1930s. However his ideas gained support after 1945. George Lansbury - Socialist and pacifist. - Edited Labour's newspaper, the Daily Herald and was also a Labour MP. - Between 1929 and 1931, he was Minister for Works in the second Labour government. - Became leader of the Labour Party between 1932 and 1935. Although popular in the party, his uncompromising pacifist views became increasingly criticised as the aggressive aims of Fascist Italy and Nazi Germany became apparent. Clement Attlee - Previously an officer in WWI, he became a Labour MP in 1922. - Held office in the second Labour government but broke with MacDonald in 1931. - Following the removal of Lansbury, Attlee became the leader of the Labour Party in 1935. - Joined Churchill's war cabinet in May 1940 becoming deputy PM. - In 1945, Attlee's party won a landslide victory and he headed two Labour governments between 1945 and 1951. - Modest and uncharismatic in appearance, he was an efficient leader. After 1945 he presided over one of the great reforming governments of the 20th century. Sir Oswald Mosley - Britain's fascist leader. - Entered politics as a Conservative MP in 1918 and was a naturally talented politician. It has been claimed that he could have been party leader of either the Conservatives or of Labour, for whom he was a junior minister in the 1929-31 government. - A brilliant speaker, Mosley gained a strong personal following for his energy and charisma. - Put forward innovative ideas to stimulate economic recovery but left Labour in 1931, and established the BUF in 1932, when he seemed to offer leadership and radical policies to solve the crisis of the Depression. ...read more.

Hugh Dalton - An academic and Labour MP who served in Churchill's wartime coalition as Minister of Economic Warfare and then President of the Board of Trade. - Became Chancellor of the Exchequer from 1945 but forced to resign in 1947 for foolishly revealing some of the contents of his forthcoming budget to journalists before he had revealed them to parliament. - Later became Labour's Minister for Town and Country Planning. Harold Macmillan - A progressive Conservative MP in the 1920s and 1930s. - Although from a well-off family, he was MP for Stockton in the depressed north-east and so was aware of the problem of mass unemployment in the 1930s. - Became an early supporter of welfare reform, which he advocated in his book The Middle Way (1938). - He had been severely wounded in WWI. In the Second World War he held office in Churchill's war coalition. - He served in the Conservative governments of the 1950s becoming PM in 1957. Aneurin Bevan - Began as a trade unionist and then elected as a Labour MP. - A persuasive and charismatic speaker with considerable natural ability. - Always on the socialist wing of the party, he made a name for himself as a rebel opposing both the party leadership and, during the war, the Churchill government. - His appointment to office was a surprise in 1945, especially as he was given 2 crucial tasks. 1) Constructing a national health service. 2) Building as many new houses as possible. - Best known as the creator of the NHS, he resigned from government when prescription charges were introduced in 1951. Hugh Gaitskell - Succeeded Stafford Cripps as Chancellor. - It was his decision to introduce prescription charges in 1951. This brought him into conflict with the young rising star of the Labour Party, Harold Wilson, who resigned from the cabinet in protest. - Gaitskell and Wilson remained rivals. Gaitskell became party leader when Attlee resigned in 1955; Wilson became party leader when Gaitskell died in 1963. ?? ?? ?? ?? DJkG.1 ...read more.