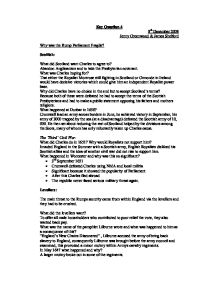 Key Question 4 - What have we learnt so far?

Key Question 4 8th December 2008 Jenny Greenwood & James Shelford Why was the Rump Parliament Fragile? Scottish: What did Scotland want Charles to agree to? Abandon Anglicanism and to take the Presbyterian covenant. What was Charles hoping for? That either the Royalist Montrose still fighting in Scotland or Ormonde in Ireland would have decisive victories which could give him an independent Royalist power base. Why did Charles have no choice in the end but to accept Scotland's terms? Because both of these were defeated he had to accept the terms of the Scottish Presbyterians and had to make a public statement opposing his fathers and mothers religions. What happened at Dunbar in 1650? Cromwell lead an army across borders in June, he achieved victory in September, his army of 3000 trapped by the sea (at a disadvantage) defeated the Scottish army of 10, 000. He then set about reducing the rest of Scotland helped by the divisions among the Scots, many of whom has only reluctantly taken up Charles cause. The 'Third' Civil War: What did Charles do in 1651? Why would Royalists not support him? Invaded England in the Summer with a Scottish army, English Royalists disliked his Scottish allies and the idea of another civil war did not rise to support him. ...read more.

Army/Levellers Why were the senior officers beginning to worry about the Rump? Because they thought elections would be infair and the Rump ignored the armies calls for reform. Law Reform What did the army think was wrong with the law? Laws were slow, old fashioned and seemed to favour the rich. What did Cromwell set up in 1651? The Hale commission on law reform, it was to consider what inconveniences there are in the law and the speediest way to reform these. What did the Rump do? A large group of lawyers in the Rump ensured the recommendations were not taken up although procedures in court were changed to being in English. Why was this so important? Because the blocking of law reform made the Rump seem self interested. Political Reform: What did the senior officers want? Reform. What happened in August 1652? In August 1652 officers tried to dictate the day when the Rump should dissolce and hold a new election, but Cromwell persuaded them not to push the matter to a conclusion. The Downfall of the Rump Write down 5 reasons why the army had become upset with the Rump. * Failure to bring reform * The Civil war and execution of the King were to make the world safe, not make politicians powerful and rich. ...read more.

There are other aspects of Cromwells personality and beliefs: * Ruthless and unpredictable eg changing from conservative to radical * Deeply religious, he believed in religious toleration * Performed the balancing act between the army and the civilian gentry in the 1650 because he had one foot in both camps. No one else could to this * Loyal to army yet understood the fear and dislike of them amongst the gentry. * Great fear on anarchy * Did not trust many politicians for example Heselrige. Views of Cromwell p119 In some ways Cromwell remains a mystery. * Clarendon, a royalist saw him as a 'Brave Bad Man'. * Ludlow, a republican, as a schemer who perverted the Republic and took power for himself. * The radicals, as the man who had the opportunity to bring in sweeping reforms and failed to do so. * One of his coolest admirers, Andrew Marvell, the poet and MP, saw him almost as a force of nature and at the same time the only possible leader in an impossible time: 'If these be the times then this must be the man.' Historians not sure of his sincerity. Motivation, successes and failures but Marvells view probably true. However can say for sure he was not consistent in what he did. ...read more.