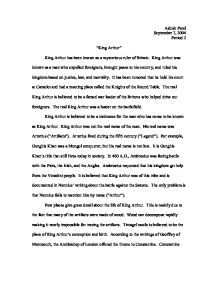 The only problem is that Nennius fails to mention him by name ("Arthur"). Few places give great detail about the life of King Arthur. This is mainly due to the fact that many of the artifacts were made of wood. Wood can decompose rapidly making it nearly impossible for tracing the artifacts. Tintagel castle is believed to be the place of King Arthur's conception and birth. According to the writings of Geoffrey of Monmouth, the Archbishop of London offered the throne to Constantine. Constantine ruled peacefully and had three sons. Constantine was murdered by a Pictish assassin. A nobleman manipulated the eldest son of Constantine and managed to gain control of Britain. Eventually other rulers followed, but Arthur was born soon after. ...read more.

This helps back up the notion of King Arthur being a fighting warrior. A female skeleton was also found along with the original lead cross. The remains were moved to the main Abbey church and mysteriously disappeared ("Artifacts"). King Arthur did exist as a human being. Writings, from various authors, have helped add intrigue to the mysterious figure known as King Arthur. King Arthur was a warrior who has had archeological findings help define him as a person. From Tintagel Castle to Glastonbury Abbey, artifacts strongly support parts of the legend of King Arthur. The findings help give us little insight, but no new proof comes along with the findings. Without more specific artifacts and literary accounts, the true identity of King Arthur will never be known, but we have been given a little insight into the real King Arthur. ...read more.