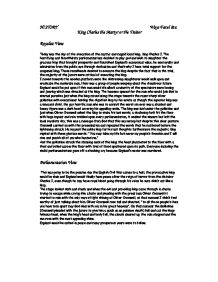 King Charles the Martyr or the Traitor

HISTORY Ways Fazel 8tu King Charles the Martyr or the Traitor Royalist View Today was the day of the execution of the martyr and magnificent king, King Charles I. The horrifying and bloodthirsty parliamentarians decided to play god and wish to slaughter the gracious king that brought prosperity and flourished England's economical value, he won loyalty and admiration from the public eye through dedication and that's why I have total support for the congenial king. Those roundheads desired to execute the king despite the fact that in the trial, the majority of the jurors were critical of executing the king. I moved towards the wooden platform were the distressing slaughterer would walk upon and eradicate the moderate man, their was a group of people weeping about the disastrous future England would be put upon if this man would die albeit a minority of the spectators were booing and jeering which was directed at the king. ...read more.

The king was laid under the guillotine and just when Oliver Cromwell asked the King to state his last words, a deafening bolt hit the floor with huge impact and rain trickled upon every parliamentarian, it soaked the sinners but left the loyal royalists dry, this was a message from God that this was wrong but despite this clear gesture Cromwell carried on with this presentation and repeated the words that he muttered before the lightening struck. He request the noble king for his last thoughts furthermore the majestic King replied with these glorious words; " You may take my life but never my people's freedom and I will rise and punish all of you who hunted me." And the guillotine struck the stunning neck of the king; the head plummeted to the floor with a thud and rolled across the floor with trial of blood spattered upon its path. ...read more.

The stage looked dark and shady and when the evil and provoking king came through in chains trying to escape while crying like a baby and pleading with the great man Oliver Cromwell it started to rain with the only rays of light shining at Oliver Cromwell, at that moment I didn't feel worthy of just talking about him. Oliver Cromwell rose tall and shouted, " to all those people's lives you have torn apart may God deal with you in his great heavens". On that moment the Guillotine (Cromwell pleaded with the jurors to give him a quick on an painless death) fell and cut the kings hideous head, when the king's head and body fell, the clouds cleared up, the rain stopped and the sun rose with the most appealing shine. England would be united in peace and many prosperous years were to follow. ...read more.