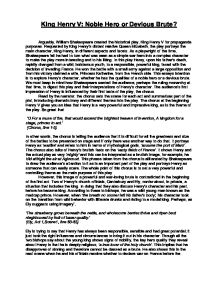 King Henry V: Noble Hero or Devious Brute? Arguably, William Shakespeare created the historical play, King Henry V for propaganda purposes. Requested by King Henry's distant relative Queen Elizabeth, the play portrays the main character, King Henry, in different aspects and facets. As a playwright of the time, Shakespeare felt he had to turn what was seen as a simple war hero into a complex character to make the play more interesting and to his liking. In this play Henry, upon his father's death, rapidly changed from a wild, boisterous youth, to a responsible, powerful king, faced with the decision of invading France. He won the battle with a small army against a large opposition and from his victory claimed a wife, Princess Katherine, from the French side. This essays intention is to explore Henry's character, whether he has the qualities of a noble hero or a devious brute. We must keep in mind how Shakespeare wanted the audience, perhaps the ruling monarchy at that time, to digest this play and their interpretations of Henry's character. The audience's first impression of Henry is influenced by their first taste of the play, the chorus. Read by the narrator, the chorus sets the scene for each act and summarizes part of the plot, introducing dramatic irony and different themes into the play. ...read more.

The French seem to respect him as a king, apart from the Dauphin who has been shown to be young and na�ve by sending Henry the tennis ball insult that partly triggered this whole siege. As the French king says, the Dauphin is 'Much mistaken in this king (Henry)'. Henry is described by the French king and the Constable with words and phrases like, 'fatal', 'royally', 'courage', 'fierce', 'noble' and 'strong'. These descriptions represent a Henry in a positive light and Shakespeare does this to show that Henry intimidates other rulers. The French, not including the Dauphin, obviously view Henry as something as a strong, noble, caring and influential. Henry shows these also in person by his skill of bringing moral and courage to his army at the siege of Harfleur, which is defiantly a good thing to have as king. Sometimes Henry doesn't show the moral lifting skills that he is famous for. On his march to Agincourt, Henry's old friend, Bardolph, was needlessly charged with death for 'robbing a church'. Henry just let him be executed seemingly not caring that Bardolph was a good friend and a reminder of his wild and exciting past. Henry treated Bardolph as an 'offender' that did a horrendous crime, which it was not, and took his life for the sake of being an example to the rest of his army. ...read more.

Their marriage signifies the end of the play. In Conclusion, this whole essay presents my opinion. It was extremely hard to balance this essay, as there are many more issues in the play that point to Henry as being more of a noble hero. I do admit, however, that there is a slight element of deviousness in his actions, but they are only necessary steps to being a hero. The play portrays Henry as a real person under pressure and burdened with the responsibility of ruling a country. It seems that he is more servant to his country but presents himself as much more then that as to be careful he does not get a bad image or thrown over, so he can rule England well. I thought that he tried his best and even though he did not feel confident, to defeat France and has an amazing skill of understanding his soldiers, therefore knowing how to lift their morals. Everything he does is noble and heroic, pardoning a few compulsory decisions that can be justified. All in all Henry was a good king and that was how Shakespeare wanted to portray him, only including a sense of deviousness and power to Henry's image to show he can control, only letting his real self slip out once in a while. This keeps the audience interested in the play so they can find out what kind of person Henry is as it unravels his character throughout the play. ...read more.