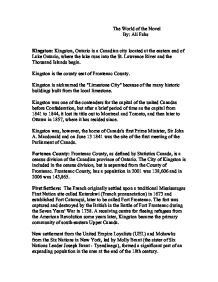 Kingston. The World of the Novel.

The World of the Novel By: Ali Fahs Kingston: Kingston, Ontario is a Canadian city located at the eastern end of Lake Ontario, where the lake runs into the St. Lawrence River and the Thousand Islands begin. Kingston is the county seat of Frontenac County. Kingston is nicknamed the "Limestone City" because of the many historic buildings built from the local limestone. Kingston was one of the contenders for the capital of the united Canadas before Confederation, but after a brief period of time as the capital from 1841 to 1844, it lost its title out to Montreal and Toronto, and then later to Ottawa in 1857, where it has resided since. Kingston was, however, the home of Canada's first Prime Minister, Sir John A. Macdonald and on June 13 1841 was the site of the first meeting of the Parliament of Canada. ...read more.

During the War of 1812, Kingston was the base for the Lake Ontario division of the Great Lakes British naval fleet which engaged in a vigorous arms race with the American fleet based at Sackett's Harbor, New York for control of Lake Ontario. After the war, Britain built Fort Henry and a series of distinctive Martello towers to guard the entrance to the Rideau Canal. All still exist, and Fort Henry is a popular tourist attraction. In 2007, the Rideau Canal and the fortifications at Kingston were designated a UNESCO World Heritage Site. Kingston Penitentiary: Kingston Penitentiary (known locally as KP and Kingston Pen) is a maximum security prison located in Kingston, Ontario between King Street West and Lake Ontario. Originally constructed in 1833-1834, and officially opened on June 1, 1835 as the "Provincial Penitentiary of the Province of Upper Canada," it is one of the oldest prisons in continuous use in the world. ...read more.

Prison Escapes: In 1999, prisoner Ty Conn escaped from within the prison; although this feat had been accomplished on at least 26 occasions beginning in 1836, Conn was the first to succeed since 1958. Conn's body was found in Toronto: he died from a self-inflicted gunshot wound while speaking on the telephone to a producer from the CBC. Recognition: Kingston celebrated in 1996 its 150th anniversary of incorporation as a city, featuring a successful blend of old and modern tradition. The elegant limestone buildings which stand alongside impressive condominiums, have earned it the popular nickname of "limestone city". The long tradition of ship building is kept alive by firms such as MetalCraft Marine which has supplied the Canadian Coast Guard with their latest vessel. Culture: Kingston has developed a thriving artistic and entertainment life. The city hosts several festivals during the year, including the Limestone City Blues Festival, the Kingston Canadian Film Festival, Fanfayr, the Kingston Buskers' Rendezvous, Kingston Jazz Festival, Reelout Film Festival and Feb Fest. ...read more.