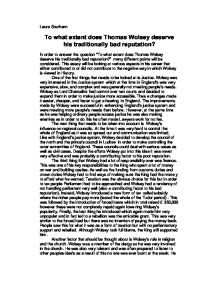 Laura Southern To what extent does Thomas Wolsey deserve his traditionally bad reputation? In order to answer the question "To what extent does Thomas Wolsey deserve his traditionally bad reputation?" many different points will be considered. This essay will be looking at various aspects in his career that either contributed to or did not contribute to the negative way in which Wolsey is viewed in History. One of the first things that needs to be looked at is Justice. Wolsey was very interested in the Justice system which at the time in England's was very expensive, slow, and complex and was generally not meeting people's needs. Wolsey as Lord Chancellor had control over two courts and decided to expand them in order to make justice more accessible. These changes made it easier, cheaper, and faster to get a hearing in England. The improvements made by Wolsey were successful in enhancing England's justice system and were meeting more people's needs than before. ...read more.

As well as the funding from customs duties and crown duties Wolsey had to find ways of making sure the King had the money to afford what he wanted. Taxation was the obvious choice for this but in order to tax people Parliament had to be approached and Wolsey had a tendency of not handling parliament very well (also a contributing factor to his bad reputation). Instead, Wolsey introduced a new form of tax called subsidy where the richer people pay more (lasted the whole of the Tudor period). This was followed by the introduction of forced loans which in total raised �350,000 however these were not completely repaid again lowering Wolsey's popularity. Finally, the last thing he introduced which again made him very unpopular and in fact led to a rebellion was the amicable grant. This was very similar to the forced load but there was no intention of paying the money back. ...read more.

At the time enclosure was a big problem in rural England and Wolsey dealt with it by recognising it as a result of greed on the part of the landowners. He launched a national enquiry to identify enclosed land and as a result 260 landowners were accused. However there was little practical effect and despite his best efforts to do the right thing Wolsey only made more enemies this time they were the landowners. In conclusion, I think that it is obvious that Thomas Wolsey's traditionally bad reputation is in many ways justified as through many of his actions he made enemies. This is especially true of his involvement in finance as it eventually lead to a revolt. However it is equally arguable that he was only acting in the interest of improving things and making life easier for others rather than purposely make them worse. A good example of this is his development of England's justice system as his primary interests were in making justice more accessible and despite making some enemies he succeeded in doing so. ...read more.