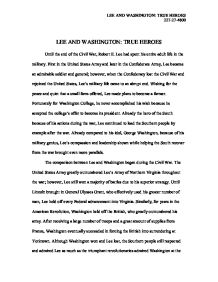 LEE AND WASHINGTON: TRUE HEROES Until the end of the Civil War, Robert E. Lee had spent his entire adult life in the military. First in the United States Army and later in the Confederate Army, Lee became an admirable soldier and general; however, when the Confederacy lost the Civil War and rejoined the United States, Lee's military life came to an abrupt end. Wishing for the peace and quiet that a small farm offered, Lee made plans to become a farmer. Fortunately for Washington College, he never accomplished his wish because he accepted the college's offer to become its president. Already the hero of the South because of his actions during the war, Lee continued to lead the Southern people by example after the war. Already compared to his idol, George Washington, because of his military genius, Lee's compassion and leadership shown while helping the South recover from the war brought even more parallels. The comparison between Lee and Washington began during the Civil War. The United States Army greatly outnumbered Lee's Army of Northern Virginia throughout the war; however, Lee still won a majority of battles due to his superior strategy. ...read more.

Both Washington and Lee wished to remain at their family's estates and farm; however, each was pushed into the national spotlight by the call of war and later recalled to heal the wounds of those wars. While Washington felt obligated to become the first President of the United States and lead the United States in its early years, Lee accepted the position as the president of Washington College and led the healing of the wounds caused by the Civil War. Thus, their compassion, leadership, and loyalty resulted in their failure to enjoy the peace and quiet they wanted. In Lee: the Last Years, author Charles Flood quotes a young man from Maryland as saying, "'It was a general belief in all the Southern States... that the example of General Lee would weigh far more in the restoration of normal conditions and true peace than any other factor in a war-torn country'" (104-105). Similarly, when George Washington entered his first term as president, the American people believed that with him as their leader, they could pull themselves out of their current economic crisis and become a powerful nation of the world. ...read more.

Despite the large number of heroes that have come from Virginia in America's short history, Lee and Washington stand out as the most prominent Virginians. Thus, the Virginia State Legislature decided to send statues of both men to the Capitol's Statuary Hall, where statues of two heroes from each state rest (Danforth, Lesman, and [email protected] 1). As the father of this country, Washington was an obvious choice as one of Virginia's greatest heroes; however, the choice of Lee, a former Confederate, surprised many people, but not those who had studied his life. Lee was always "... an honorable man, a loyal husband, and a loving father" (Danforth, Lesman, and [email protected] 6). A military genius, he helped his nation and his state by serving in the military. According to some, "Robert E. Lee's statue in the Capitol stands for [his admirable traits]..., but it also stands for the peculiarly American process by which a mortal enemy can become a patriot" (Danforth, Lesman, and [email protected] 6). Without Lee's leadership, the nation never could have recovered from the hatred caused by the Civil War. He led the movement to heal the wounds between the north and the south; thus, becoming as much an American hero as his idol, George Washington. ...read more.