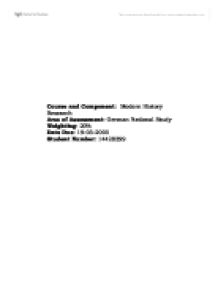 Leni Riefenstahl The Propagandist or Artist? A Historiographical Debate.

Course and Component: Modern History Research Area of Assessment: German National Study Weighting: 20% Date Due: 19-05-2005 Student Number: 14428399 Sources Source A In 1945, Riefenstahl was interrogated by Captain Wallenberg; a German born naturalised American that used to play with Riefenstahl's brother as a child, in summation of his interrogation report he wrote: Source B John Totland (1999), said about Hitler's attempt to intervene in the production of Triumph of the Will Source C In her critique "Fascinating Fascism"(1980), American social commentator Susan Sontag has argued that all of Riefenstahl's work, form the 1930's to the 1970s, contains elements that promote Nazi and fascist ideas Background * Name: H�l�ne Bertha Amelie Riefenstahl * Date of Birth: August 22, 1902 (Berlin) * Family: Leni was the daughter of a prosperous businessman and a part time seamstress, she was brought up in a middle class happy supportive close family with two siblings. Her privileged economic status ensured she was protected from most of the economic, social and political unrest of the times. * She lived to be over 100 years of age and was an independent woman for most of her life and despite having a series of love affairs she was only married once for 3 years and divorced after he was unfaithful. She had no children but her highly demanding career and driving ambition saw her suffer many mental health problems and the need for hospitalisation many times over her long life. First Career: Riefenstahl as a dancer * Leni Riefenstahl began her career as a dancer in 1923, by which time she had been self taught mostly learning by watching others. * It was greatly against the wishes of her father and she studied dance secretly, as he held plans for her in office work after she finished the privileged school she attended * Leni was always called a dreamer from a very young age - this and her dancing meant she remained largely unaware of the broader world of politics around her. ...read more.

* However, Riefenstahl maintained that it was simply a documentary, and claims her innocence in never realizing the effect that her films had on promoting the Nazi cause. She "didn't see the danger of anti- Semitism" and that "it had to film the way an artist, not a politician, sees it". * It shows historians how the Nazi state drew in the masses through propaganda and Hitler's unique and terrifying ability to entice crowds and display his power. * The German Labor Front represented an attempt by the Party to organize the workforce along military lines. * Hitler is placed apart and photographed from below to emphasize that only he is an individual, the identity of the other participants is merged into the masses. Result * Triumph of the Will had its premiere in the larger cities but not with a wider public and for this reason it was not used generally for propaganda purposes. * Riefenstahl created artistic intensity by using many cameras and apparatus and different camera positions. Then very careful editing and even remaking of scenes with the result that the film won the German Film Prize and several other awards * Her artistic depth brought accusations that she was glorifying the Nazis, however, Riefenstahl said she was simply capturing the event in an artistic way and was not intending to glorify the Nazis. * The film was seen as not a typical Nazi propaganda film as Goebbels preferred indirect propaganda for the feature length film, concentrating direct propaganda in the newsreel. The film - "OLYMPIA" * Olympia (1938) was a truly innovative film, established precedents for filmed sports coverage that continue to the present day, as well as inventing new devices to facilitate the filming. * General agreement that this monumental effort by Leni Riefenstahl stands as one of the great moments of world cinema, a pioneering, innovative film that changed the course of filmmaking. ...read more.

Revisionist feminist historians believe that Riefenstahl has been defamed because she is a successful woman in a male profession. * Revisionists also point that no other male filmmaker of the period has suffered for his affiliations with the Nazis as much as Riefenstahl. For example film director Georg W.Pabst, made three films for the ministry of Propaganda in the 1940s and faced no retribution and continued to work making films in Germany well into the 1950s. Another film industry great that did not suffer was Gustaf Grundgens, who remained a star in West Germany until the mid 1960s. RIEFENSTAHL'S OWN VIEW OF HERSELF * Recent effort to re-evaluate Riefenstahl's role in Nazi Germany, have portraying her as highly talented and opportunistic, but politically na�ve in her youth, allowing herself to be used by Hitler as a propagandist. * Riefenstahl clashed with Goebbels, who resented her independence and closeness to Hitler. She claims that Goebbels wanted her to edit out footage of black athletes from Olympia and demanded control over both the final cut and her production staff * She claims she knew nothing of concentration camps until imprisoned by the Allies but she had been accused of using gypsy inmates in her films. * Ultimately, Riefenstahl wished history to view her as she viewed herself: not as a collaborator but as an artist whose sole fault was to have been at the wrong moment in history, and who was exploited by political forces of which she was unaware. She stated: "I regret I was alive during the period. But I was never anti-Semitic. I never dropped any bombs." * She claims she was never interested in politics, never a member of the Nazi Party she said: 'I was not a Communist. I was not a Nazi. I was an artist! I was nothing. I had no party") and she merely made artistic documentary films 'lt is history. A purely historical film' 1 11 ...read more.