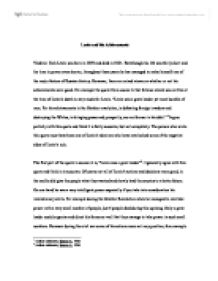 Lenin and his Achievements.

Lenin and his Achievements Vladimir Ilich Lenin was born in 1870 and died in 1924. Eventhough his life was fairly short and his time in power even shorter, throughout these years he has managed to make himself one of the major factors of Russian history. However, there are mixed views on whether or not his achievements were good. For example the quote from source A that follows which was written at the time of Lenin's death is very much for Lenin. "Lenin was a grate leader yet most humble of men. For his achievements in the October revolution, in defeating foreign invaders and destroying the Whites, in bringing peace and prosperity, we are forever in his debt." 1I agree partially with this quote and think it is fairly accurate, but not completely. The person who wrote this quote must have been one of Lenin's admirers who have overlooked some of the negative sides of Lenin's rule. The first part of the quote in source A is, "Lenin was a great leader"2. I generally agree with this quote and think in is accurate. Of coarse not all of Lenin's actions and decisions were good, in the end he did give the people what they wanted and slowly lead the country to a better future. ...read more.

The thirst section of the quote in source A is "For his achievements in the October revolution...we are forever in his debt"5. I think this statement is accurate and I agree with it. Eventhough Trotsky organized it, the revolution was Lenin's idea and he was the one who led and pushed it forward. Lenin's achievements during the October revolution were truly ingenious. This is because he managed to take power with the minimum amount of people and with fast direct and very well organized attacks on key strategically targets. In a short amount of time the Bolsheviks managed to take over the parliament, telegrams, newspapers and other organizations needed to run a country. With these takeovers he got into power. The greatest thing about Lenin's actions during the October revolution was that there was almost no bloodshed. Only 6 people died during the whole uprising. 6 The fourth section of the quote in source A is " in defeating foreign invaders...we are forever in his debt"7, and I think it is accurate and I agree with it. By foreign invaders the writer means to say the Germans during World War I. ...read more.

I think that this statement is accurate. Eventhough during Lenin's rule there was a famine and a civil war and the fact that he was not elected into power but forced his way there I still agree with this section of the quote. This is because in my opinion Lenin knew what the people wanted and he tried to give it to them. But mostly because he helped Russia start its journey towards modernization and economical improvement. He led Russia out of feudalism and czarism into Socialism a more modern, more economically efficient and more people friendly system. He started Russians reformation and for that he should be respected. In conclusion I would like to say that the quote in source A is fairly accurate. Not all of it I agree with but the majority are correct. Lenin was more successful as a revolutionary rather then as a statesmen. However he was an extraordinary man who had an impact on Russia and the world. He introduced Socialism and got Russia out of feudalism, and that is his greatest and most positive achievement. He helped the country move forward. Eventhough not all of his actions were positive; he will be remembered as a revolutionary and the leader of a country, not as a brutal tyrant. ...read more.