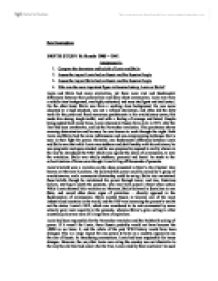 Sam Gunningham DEPTH STUDY B: Russia 1905 - 1941 Assignment A: 1. Compare the characters and beliefs of Lenin and Stalin 2. Assess the impact Lenin had on Russia and the Russian People 3. Assess the impact Stalin had on Russia and the Russian People 4. Who was the more important figure in Russian history, Lenin or Stalin? Lenin and Stalin had many similarities, yet there were vast and fundamental differences between their personalities and ideas about communism. Lenin was from a middle class background, was highly educated, and very intelligent and intellectual. On the other hand, Stalin was from a working class background. He was never educated to a high standard, was not a refined intellectual, and often did the dirty work for the party and faced numerous punishments in his revolutionary years; this made him strong, tough tactful, and with a feeling of revenge and hated. Despite being pushed back many times, Lenin returned to Russia from exile in 1917, after the Tsar had been overthrown, and led the November revolution. ...read more.

Stalin wanted Russia to become one of the most industrialised countries in the world, and the NEP was increasing the peasant's wealth not the states. Lenin's NEP, which was considered to be anti-communist by some actually gave more equality to the peasants, whereas Stalin's grain selling to other countries policy was more of a large form of capitalism. Lenin had been responsible for the November revolution and the Bolshevik seizing of power. If it wasn't for Lenin, them Russia probably would not have become the USSR as we knew it, and the whole of the post WWI history would have been changed. This is a large impact for one person to have on a country, especially one the size of Russia. In introducing communism, Lenin had been responsible for many changes. However, the way that Lenin was ruling the country was not dissimilar to the way the old Tsar had ruled. Like the Tsar, Lenin ruled by force and terror: he used the secret police to maintain power. ...read more.

His paranoid purges caused more terror amongst his people. Stalin also helped to bring down the iron curtain, which had a tremendous effect on the Russian people. Stalin stopped the NEP, and brought about the five point plans and collectivised farming. This turned transformed Russia into a powerful industrial nation, but the people suffered greatly, and the quality of goods was low. Both Lenin and Stalin were massive figures in Russian history, but who was greater? Stalin ruled for many years longer than Lenin, and his politics were more extreme: he had more people killed, and he was more widely feared. Stalin had realized his dream, in a way, of turning Russia into a rich industrialised nation, if you believe that the end justifies the means. During his lifetime, Stalin's propaganda made sure that he was the most important figure in Russian history: he was trying to portray himself as a god. However, I believe that Lenin was a more important figure, because he actually started the revolution. Lenin had brought Russia into communism and Stalin had just continued it - whatever Stalin had done, it would not have been possible if it weren't for Lenin. Information Wrom: EXCAXZOWCONEUQZAAFXISHJEXXIMQZUIVOTQNQEMSFDULHPQQWOYIYZUNNYCGPKY ...read more.