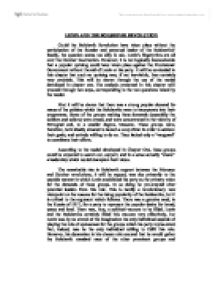 Lenin and the Bolshevik revolution.

LENIN AND THE BOLSHEVIK REVOLUTION Could the Bolshevik Revolution have taken place without the participation of the founder and perpetual leader of the Bolsheviks? Really, the question seems too silly to ask. Lenin's fingerprints are all over the October insurrection. However, it is not logically inconceivable that a popular uprising could have taken place against the Provisional Government without the aid of Lenin or his party. It will be contended in this chapter that such an uprising was, if not inevitable, then certainly very probable. This will be shown through the use of the model developed in chapter one. The analysis presented in this chapter will proceed through two steps, corresponding to the two questions raised by the model. First it will be shown that there was a strong popular demand for many of the policies which the Bolsheviks were to incorporate into their programme. Some of the groups making these demands (especially the soldiers and sailors) were armed, and were concentrated in the vicinity of Petrograd and, to a smaller degree, Moscow. These groups were, therefore, both ideally situated to launch a coup d'etat in order to achieve their goals, and entirely willing to do so. They lacked only a "vanguard" to coordinate their efforts. According to the model developed in Chapter One, these groups could be expected to search out, support, and in a sense actually "create" a leadership which would champion their views. The remarkable rise in Bolshevik support between the February and October revolutions, it will be argued, was due primarily to the capable manner in which Lenin established his party as the primary voice for the demands of these groups. In so doing he pre-empted other potential leaders from this role. This is hardly a revolutionary new viewpoint on the reasons for the rising popularity of the Bolsheviks, but it is critical to the argument which follows. There was a genuine need, in the Russia of 1917, for a party to represent the popular desire for bread, peace and land. ...read more.

Whatever the methods used, the peasants were handling their problems to a large extent on their own. The greater rewards to be gained from this sort of activity over participating in the national political forum helped ensure that peasant participation in that forum would stay a low level. The support of the peasants was valuable for different reasons. The army was mostly made up of peasants--"peasants in uniform" as they came to be known. Therefore the party with policies most favourable to the interests of the peasant masses would be likely to gain support in the garrisons and trenches. Lenin himself certainly believed this to be the case, and indicated several years after the revolution that he considered one of the main reasons for his party's victory in the revolution to be its indirect appeal to the soldiers through its generous policies towards the peasantry. The industrial workers were also tied, to an extent, to the peasantry. Many workers still had roots in the villages. This could mean that their relatives still lived there, or that the worker's immediate family had remained on the farm while he (or she, although this was less likely) had gone to the city to find employment. In a survey conducted shortly before the war, it was determined that 46% of all workers in the Moscow printing trade had farms which presumably were worked by family members while the city-dwelling individual was away. There is a further way in which peasant support may have proved valuable to the Bolsheviks. There is an interesting correlation between those areas of the countryside which voted for the Bolsheviks in the elections to the Constituent Assembly in November 1917 and the areas which remained loyally pro-Red in the Civil War. Areas where the Whites were strongest tended to be those areas in which electoral support for the Bolsheviks had been the weakest. While not too much should be read into this correlation, which as yet has not been satisfactorily explained, it is certainly ...read more.

Lenin had failed to seize the moment, failed to avert the trend to a compromise coalition regime of the soviets, failed to nail down the base for his personal dictatorship--until the government struck on the morning of the 24th of October. The answer provided in the preceding pages to the second question posed by the model of replaceability is that there were alternative sources of leadership in 1917 to that of Lenin. It is patently ridiculous to suggest that Trotsky or any of the lesser lights would or could have produced exactly the same leadership as Lenin. However, leadership of so massive an enterprise as a proletarian revolution is to a certain degree a collective task, and clearly much of the supporting cast was more flexible in its partisan loyalties than it was in its internationalist and proletarian ideals. Not only was there alternative leadership, but there was no mechanism by which this alternative leadership could have been denied access to the means of insurrection. There is no reason to believe that the Provisional Government would have been any more capable of suppressing them in the end than it was of suppressing Lenin's Bolsheviks in October. The facts laid out in this chapter firmly suggest that Lenin was by no means irreplaceable. Such leadership as he provided was being actively sought, for the most powerful groups in Russia had much to gain from it. As the "replaceability" model indicates, drawing upon the examples of the "races" to develop various potentially profitable products, such circumstances tend to provide multiple candidates. And certainly, it is also clear that there was a substantial pool of revolutionary talent upon which to draw. These are the conditions under which it is most difficult for an individual to alter the course of events, in a unique and idiosyncratic manner, for he or she is likely simply to be replacing another individual more or less equally suited to the task. On this basis it seems unlikely that Lenin changed the course of the revolution or, therefore of the many events influenced by the revolution's outcome. ...read more.