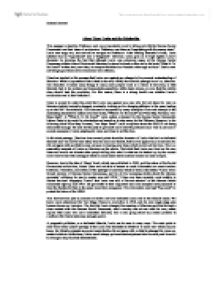 Lenin and the Bolsheviks.

Adam Ulam- Lenin and the Bolsheviks. This passage is describes Plekhanov and more importantly Lenin's falling out with the German Social Democrats over their ideas of revisionism. Plekhanov saw them as "negotiating with the enemy class". Lenin was angry too, but not half as enraged as Plekhanov. After reading Bernstein's book, Lenin labelled him an "opportunist" and a "plagiarist". However, Ulam goes on to high lighten Lenin's character by showing the fact that although Lenin was extremely angry at the German Social Democracy at their idea of Revisionist Marxism, he turns his back on this and in his book "What Is To Be Done?" written two years later, he accepts that Marxism "needed a thorough revision". But he was not being hypocritical as his revisionism was orthodox. Ulam has implied in this passage that Lenin was against any change to his personal understanding of Marxism. ...read more.

However, in his following book "One Step Forward, Two Steps Back" Lenin complains about the RSDLP not being democratic enough. He calls for the party to get much more into the political scene. This is just one of several examples of Lenin adapting his views and ideas to suit the time. In this short passage, Ulam has risen several points about the character of Lenin- that he is a dedicated Marxists and will not be lead astray from his aims and beliefs, that he was against any revisionism he did not agree with and that he was not open to hearing new ideas which he did not find true. This is a reasonably accurate of Lenin on Marxism on the whole. The belief that Lenin was fixed on his own ideas and would not tolerate other people telling him what is what can be backed up by the several sever rows he had with colleagues which in some cases lead to extreme illness and near collapse. ...read more.

We know Lenin abandoned the Two Stage Theory to revolution in 1916, and his new single stage plan became known as Leninism. The fact that Lenin changed the meaning of Marxism and that he kept a close contact with the German Social Democrats, who's country was at war with his own, rather implies that Lenin was not a dedicated Marxists, but a man going about any means possible to overthrow the Tsarist autocracy and gain power. A pragmatic politician, or a dedicated Marxist, Lenin can be seen in many ways. The main point to draw from Adam Ulam's passage is that Lenin was dedicated to whatever is cause was- which only he knew. Be it that he rejected any point made that he did not agree with, or that he changed his views on certain beliefs to fit the times, Lenin would always put one-hundred percent into his work, and it would be wrong to deny him that characteristic. ?? ?? ?? ?? Richard Daverat ...read more.