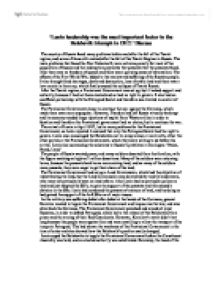 'Lenin leadership was the most important factor in the Bolshevik triumph in 1917.' Discuss

'Lenin leadership was the most important factor in the Bolshevik triumph in 1917.' Discuss The country of Russia faced many problems before and after the fall of the Tsarist regime, and some of those still existed after the fall of the Tsarist Regime in Russia. The main problems that faced the Tsar Nicholas II, were extreme poverty for most of the population of Russia and the redemption payments that peasants that the peasants faced. Also there was no freedom of speech and there was a growing sense of nationalism. The effects of the First World War, added to the anxiety and suffering of the Russian people. It also brought food shortages, death and destruction, loss of arable land and there was a low morale in the army, which finally caused the collapse of Tsarist Russia. ...read more.

Lenin also summed up the solutions to Russia's problems in his slogan: 'Peace, Bread, Land.' The people of Russia wanted peace, and many soldiers deserted from the frontline, with the figure reaching as high as 2 million desertions. Many of the soldiers were returning home, because the peasants back home were seizing land, and as many of the soldiers were peasants, they were eager to get their share of the land. The Provisional Government had set up a Land Commission, which had the objective of redistributing the land, but the Land Commission was dominated by mostly landowners, who were not particularly keen on land reform. Also Lenin had no particular policy on land and just adopted the SR's, to gain the support of the peasants and this caused a division in the SRs. ...read more.

Lenin used the advantage of his small group, who were well disciplined and very loyal. The key positions were seized by the Bolshevik Red Guard units, who were under direction of the Military Revolutionary committee, which was co-ordinated by Trotsky. The Bolsheviks took Petrograd in 3 days, because they faced very little resistance. The success of the Bolshevik Party was determined by many factors, such as the failure of the provisional Government to govern the country and its weaknesses in dealing with threats such as the Kornliov Coup. Also the Bolshevik party itself was well organised and well disciplined, due to the tactics of leader. The involvement of Trotsky in the October Revolution was crucial as he held a key position in the Petrograd Soviet. All these factors did contribute to the Bolshevik success, but in my opinion, without Lenin's influential leadership skills, tactics and organisation of the Bolshevik party, the Bolsheviks could not have gained power in October 1917. By Hyder Mushtaq ...read more.