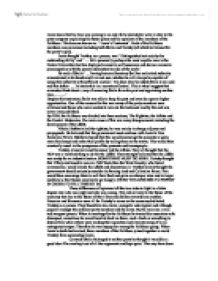 Lenin knew that his time was coming to an end. So he decided to write a letter to the party congress explaining his future plans and his opinions of the members of the Politburo. This became known as ' Lenin's Testament'. Each of his Politburo members was examined including both Stalin and Trotsky (of which he blamed for the party's split). Lenin thought Trotsky, as a person, was ' Distinguished not only by his outstanding ability' and ' ... He's personally perhaps the most capable man in the Central Committee but has displayed excessive self assurance and shown excessive preoccupation with the purely administrative side of the work'. He said of Stalin ' ... ...read more.

The main cause of this was many disagreements including the development of the USSR. Nikolai Bukharin led the rightists; he was mainly in charge of press and propaganda. He believed that the government must continue with Lenin's New Economic Policy. Bukharin hoped that this would encourage the peasants to grow more food crops and make their profits by selling them to the towns. This would then eventually result in the prosperous of the peasants and townspeople. Trotsky, Zioneviev and Kamenev led the leftists. They all thought that the NEP was a very bad thing to do for the USSR. They strongly believed that the USSR was ready for an industrialisation. SOMETHING MUST GO HERE. ...read more.

But he was also a vain and arrogant person. When in meetings for the Politburo he treated his associates with disrespect, sometimes he would turn his back on them, read a book or something to distract him while others were reading their speeches and even storming of in an outrageous temper. Therefore he was unpopular among the Politburo group. When Lenin's death had arrived, three members of the Politburo joined together to avoid Trotsky from succeeding Lenin. Comrade Stalin Belonged to neither party he thought it would be a good idea if he was kept out of all the arguments and kept quiet. This may have been part of the plan to make the Politburo hate Trotsky so much that they would decide that he was a better candidate for the party. ...read more.