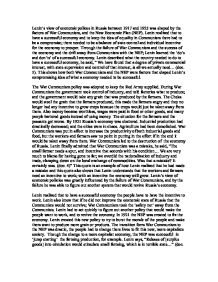 Lenin's view of economic polices in Russia between 1917 and 1923 was shaped by the factors of War Communism, and the New Economic Plan (NEP). Lenin realized that to have a successful economy and to keep the idea of equality in Communism there had to be a compromise; there needed to be a balance of state control and individual incentive for the economy to prosper. Through the failure of War Communism and the success of the economy and the drift away from Communism with the NEP; Lenin learned the 'do's and don'ts' of a successful economy. Lenin described what the country needed to do to have a successful economy, he said, " We have found that a degree of private commercial interest, with state supervision and control of that interest, is all we actually need... (doc. 5). This shows how both War Communism and the NEP were factors that shaped Lenin's compromising idea of what a economy needed to be successful. ...read more.

Lenin's view of economic policies was greatly influenced by the failure of War Communism, and by the failure he was able to figure out another system that would revive Russia's economy. Lenin realized that to have a successful economy the people have to have the incentive to work. Lenin also knew that if he did not improve the economic state of Russia that the Communists would not survive; War Communism took the 'safety net' away from the Communists. Lenin had to act quickly to figure out another policy that would make the people want to work, and to revive the economy. In 1921 the NEP was created to fix the economy. Lenin created this new policy to try to burst the morale of the people and make them want to produce more grain or products. The transition form War Communism to the NEP was drastic, the people had to change there lives to fit this new, more capitalists society. ...read more.

(doc. 2) Lenin was talking about the great increase in the production of grain, this great increase was directly related to the NEP; because the peasants could keep some of the grain they made which gave them an incentive to work hard. Communists were angry because they saw the country returning to capitalism. They did not like the fact that bosses of factories called kulacks could hire men to work for them. Also Communists disliked the 'Nepmen', because they made a high profit by buying goods cheaply and then selling them for more. Though the NEP revived the economy, people, especially peasants were unhappy with the new capitalist society. Lenin's view of economic policies was changed through the NEP, he knew that people need the incentive to work, but he also knew he could not give the people to much economic freedom; the idea of balancing the policy of War Communism and NEP was Lenin's final view of how to keep the people happy and to sustain a great economy. ...read more.