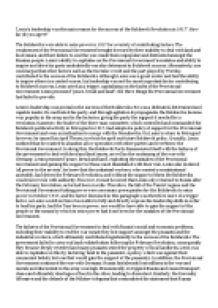 Lenins leadership was the main reason for the success of the Bolshevik Revolution in 1917. How far do you agree?

﻿?Lenin?s leadership was the main reason for the success of the Bolshevik Revolution in 1917?. How far do you agree? The Bolsheviks were able to seize power in 1917 for a variety of contributing factors. The weaknesses of the Provisional Government brought forward by their inability to deal with land and food issues, and their failure to end the war, made them unpopular and distrusted amongst the Russian people. Lenin?s ability to capitalise on the Provisional Government?s mistakes and ability to inspire and drive his party undoubtedly was also detriment to Bolshevik success. Alternatively, one could argue that other factors such as the Kornilov revolt and the part played by Trotsky, contributed to the success of the Bolsheviks. Although Lenin was a great orator and had the ability to inspire others in a united course, his leadership was not the most important factor contributing to Bolshevik success. Lenin acted as a trigger, capitalizing on the faults of the Provisional Government; Lenin promised ?peace, bread and land?, the three things the Provisional Government had failed to provide. Lenin?s leadership was pivotal in the success of the Bolsheviks. He was a dedicated, determined and capable leader. ...read more.

One of the major weaknesses of the Provisional Government was its lack of credibility and authority. For the masses of Russian people the government did not bring any immediate change. They were unable to distinguish themselves from the Tsar?s government; in fact many in the government were also in the government of the Tsar including the leader Prince Lvov, Milyukov, leader of the Kadets and Kerensky, war minister. Association with the Tsar made them unpopular and distrusted from the start. The Soviets had a better claim to legitimacy as they had been formed from representatives of the workers; an idea that the Bolsheviks used as a vehicle to gain legitimate power. The weaknesses of the Provisional Government was the main reason for Bolshevik success. Their political and social failures ultimately allowed Lenin and the Bolsheviks the opportunity to gain popularity amongst the industrial and peasant classes, whilst destroying the reputation of those parties affiliated with them. Had the Provisional Government been able to end the war and re-establish command over the army, then they would have been able to restore order in Petrograd and arrest the Bolsheviks, alike what Kornilov attempted. Another aspect contributing to the Provisional Government?s failure was the decisions made by their Prime Minister, Kerensky. ...read more.

Although, Trotsky?s role was important to Bolshevik success, it can be deemed a contributing factor. If it were not for the inability of provisional Government to provide its own, reliable military the MRC would have been largely ineffective. Similarly, the weaknesses of the Soviet in allowing Trotsky and the Bolsheviks to dominate can all be considered the underlying factors. Undoubtedly Lenin?s leadership was detriment to Bolshevik success, his ability to inspire and unite the Bolsheviks created a new breed of politician: utterly self-confident, scornful of all other parties and ideas and totally loyal to their leader, without him the party may never have been able to fully capitalise on the mistakes made by the Provisional Government, under Kamenev?s leadership they may have merged with Mensheviks and been consigned to the ?garbage heap of history?. The effect of the Kornilov Revolt and the role of Trotsky are contributing factors to the October Revolution. However, the underlying reason for the success of the Bolsheviks is the failures of the Provisional Government. Their inability to address Russia?s problems gave Lenin and the Bolsheviks the opportunity to gain the support of not only the people of Petrograd, but of Russia. Lenin?s role was a trigger factor, capitalising on the government?s mistakes and seizing the opportunity provided. ...read more.