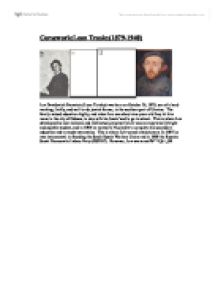 Corsework:Leon Trosky(1879-1940) Lev Davidovich Bronstein (Leon Trotsky) was born on October 26, 1879, son of a hard-working, thrifty, and well-to-do jewish farmer, in the southern part of Ukraine. The family valued education highly, and when Lev was about nine years old they let him move to the city of Odessa, to stay with his 'uncle' and to go to school. This is where Lev developed his nice manners and intellectual personality.Lev was an exeptionally bright and capable student, and in 1896 he moved to Nicolayev to complete his secondary education and to study matematics. ...read more.

That year Trotsky escaped Siberia, and at the Fifth Party Congress in London he met Stalin for the first time. For the next several years Trotsky was busy publishing several papers, among them Pravda. In 1917, as the Tsar abdicated, Leon Trotsky went to Russia, and in August that year he became a member of the Central Committe of the Bolshevik Party, which had Lenin as its uncontested leader and visionary. In this capacity Trotsky became second in command after Lenin. In 1918 Trotsky was appointed People's Commissar for Military and Naval Affairs, and as such he managed the founding of the Red Army. ...read more.

Trotsky used his writings to oppose Stalin, and to establish an alternative direction for communism, and his followers became known as Trotskyists. While Stalin was struggling with practical problems in the Soviet Union, the Trotskyists were fighting for class equality between intellectuals and capitalists. Being a communist leader expelled from his homeland, Leon Trotsky had a hard time finding a country where he would be allowed to reside. He stayed temporarily in several countries, until he was allowed to come to Mexico in 1937, after Diego Rivera had used his influence to make this possible. August 20th 1940 Leon Trotsky was attacked with an ice-axe in his office in Mexico City by one of Stalin's followers, and the following day Leon Trotsky died. ...read more.