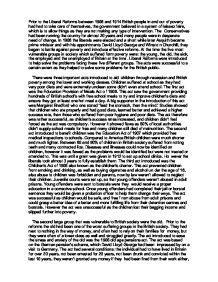 Prior to the Liberal Reforms between 1906 and 1914 British people in and out of poverty had had to take care of themselves, the government believed in a system of laissez faire, which is to allow things as they are not making any type of intervention. The Conservatives had been running the country for almost 20 years and many people were in desperate need of change. In 1906 the liberals were elected and a short while later Asquith became prime minister and with his appointments David Lloyd George and Winston Churchill, they began to battle against poverty and introduce effective reforms. At the time the five most vulnerable groups in society which suffered form poverty were: the young, the old, the sick, the employed and the unemployed of Britain at the time. Liberal Reforms were introduced to help solve the problems facing these five different groups. The acts were successful to a certain extent as they helped to solve some problems for the British public.

There were three important acts introduced to aid children through recession and British poverty among the lower and working classes. Children suffered at school as they had very poor diets and were extremely unclean some didn’t even attend school. The first act was the Education Provision of Meals Act of 1906. This act saw the government providing hundreds of British school’s with free school meals to try and improve children’s diets and ensure they got at least one hot meal a day. A big supporter in the introduction of this act was Margaret Bradford who one stated ‘feed the stomach, then the mind.’ Studies showed that children who ate properly and had good diets, learned better and achieved a higher success rate, than those who suffered from poor hygiene and poor diets. The act therefore was rather successful, as children’s success rates increased, and children didn’t feel forced as the act was compulsory. However it showed flaws as 50% of local authorities didn’t supply school meals for free and many children still died of malnutrition. The second act introduced to benefit children was the Education Act of 1907 which provided free medical inspections to schools. Compared to America British children were much shorter and much lighter. Between 80 and 90% of children in British society suffered from rotting teeth and many contracted lice. Diseases and illnesses could now be identified on children, however it was flawed as the problems would be identified but were not treated or attended to. This was until a grant was given in 1912 to set up school clinics. However the liberals took almost 3 years to fully establish them. The third act introduced was the Children’s Act of 1908 also known as the children’s charter. This act prevented children from smoking and drinking, as well as buying cigarettes and alcohol under the age of 16, also abuse to children was forbidden and parents, now by law weren’t allowed to neglect their children. Juvenile courts were set up, so that young offenders weren’t abused in adult prisons. Young offenders were sent to borstals were they would receive a proper education in a corrective school. Once young offenders had completed their jail or borstal sentence they would be given a probation officer to help them change their ways. The act was successful as children would be safe, and free from abuse from adult prisons and could grasp a better idea of a better and more fulfilling life from their detention centres and borstals. However the act was unsuccessful as the children lost their begging income and slipped further into poverty.

The second large group that was vulnerable to British society were the old. Prior to the reforms the old had been one of the worst suffering groups in the British society. They had next to nothing in the way of money, and often had to rely on their families for money, but they were often of a lower class as well and struggled greatly. The act introduced to ease the stress and anxiety of the old was the 1908 old age pensions act. The act was based on the German pension’s scheme, which David Lloyd George had been impressed by on a visit to Germany. The act had several conditions: the individual had to have lived in Britain for over 20 years, not been arrested for 20 years, not been drunk and convicted within the last 10 years, they weren’t granted any money if they had been fired from their work either, and they had to be over the age of 70. If they qualified for the pensions act then they would receive 5 shillings a week, but according to the poverty reports compiled by Booth and Rowntree people needed a minimum of 7 shillings a week to remain above the poverty line. It was estimated that around 500,000 people would apply to the pension’s scheme, but in fact a massive 650,000 applied in 1909 and 1 million in 1914. Overall we can see that the reform introduced to aid the old though poverty was very beneficial as older people now had a longer life expectancy as they were now able to afford more of their basic necessities and were more fulfilled because of it. However, the act showed some weakness as the scheme was only granted to over 70’s and terms and conditions applied, which were very harsh. So the act helped ease stress and anxiety but wasn’t very successful in the long run.

The third vulnerable group which suffered the effects of poverty were the sick.  The sick were viewed as perhaps the most vulnerable group in society during the times of the poverty crisis. They were affected greatly as the biggest cases of illness and disease occurred within the working classes, which meant they couldn’t afford proper health care or medicine to try and help them get better, as they were sick they couldn’t get well paying jobs as employers weren’t willing to hire a sick person and risk the rest of his employees getting sick as well. The act introduced to aid the sick from the poverty crisis was the National Insurance Act part I of 1911. This act saw the sick receive free medical inspections and receive free treatment. The act was very flawed and Lloyd George admitted this himself by saying that he thought the act needed more work, but this was all the liberals could do at that time. The insurance from the sick had to be taxed from their small wages and minimal income. Overall one can see that the act was successful as the free medical inspections and treatment insured that they received good and accurate prescriptions and were nursed back to full health, which meant they could find jobs and earn a decent income. However the act was very flawed as the orphan and widow benefits were dropped as the government couldn’t afford the insurance scheme without this extra money.

The fourth large group that was vulnerable to was the unemployed.  There were two important acts introduced to aid the unemployed through recession and British poverty among the lower and working classes. Prior to these reforms the unemployed had suffered greatly. Middle classes blamed poverty among the unemployed on their inability to find work on laziness and reluctance. Two acts were introduced to try and aid the unemployed from the poverty crisis. The first of these acts was the National Insurance act part II of 1911. This act made sure that the unemployed received unemployment insurance. This insurance scheme was aimed mostly at shipbuilders and construction workers. The unemployed only received 15 weeks of payment a year at 7 shillings a week, but this wasn’t enough to keep them out of poverty.  More and more people found themselves being sacked which meant they wouldn’t be eligible to receive the insurance scheme money. By 1915 around 2.3 million people were insured under this scheme. Hundreds of unemployed people now received and were introduced into the insurance scheme despite the fact they were unemployed, which insured that had at least some cover which they could easily afford. However the act showed flaw, as they didn’t receive enough  to cover the basic necessities, the scheme didn’t accommodate family cover which meant that if another family member was injured or needed money for something then they would have to pay the full price, which would often be very expensive, and some couldn’t afford it. The second act introduced to aid the unemployed from the poverty crisis was the 1909 Labour Exchanges act. It provided a more efficient method of finding jobs. Almost 3000 jobs were now available a day. In 1910 there were around 83 labours and by 1913 it had increased to a massive 430. There was also a wider range of jobs which meant that people could find jobs more suited to the skills they had. There were many more jobs available for the unemployed meant they could earn decent wages to afford the basic necessities. One can see that the reforms helped to a certain extent. People now had more help and a large push to find a job and earn wages, the unemployed received and were introduced into an insurance scheme which paid them money for 15 weeks in the year. However, the insurance scheme didn’t accommodate family cover and it only paid 15 weeks a year at 7 shillings of money which wasn’t enough to cover the basic necessities. Also the Labour Exchanges act only opened up jobs for some trades which were very limiting for people who didn’t have many skills.