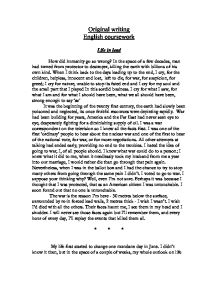 Life in lead How did humanity go so wrong? In the space of a few decades, man had turned from protector to destroyer, killing the earth with billions of his own kind.

Original writing English coursework Life in lead How did humanity go so wrong? In the space of a few decades, man had turned from protector to destroyer, killing the earth with billions of his own kind. When I think back to the days leading up to the end, I cry, for the children, helpless, innocent and lost, left to die, for war, for suspicion, for greed; I cry for nature, unable to stop its fated end and I cry for my soul and the small part that I played In this sordid business. I cry for what I saw, for what I am and for what I should have been, what we all should have been, strong enough to say 'no' It was the beginning of the twenty first century, the earth had slowly been poisoned and neglected, its once fruitful resources were depleting rapidly. War had been building for years, America and the Far East had never seen eye to eye, desperately fighting for a diminishing supply of oil. I was a war correspondent on the television so I knew all the facts first. I was one of the first 'ordinary' people to hear about the nuclear war and one of the first to hear of the national vote, for war, or for more negotiations. All other attempts at talking had ended early, providing no end to the troubles. I hated the idea of going to war, I, of all people should. ...read more.

It was for that reason that I sought the number of a man I'd heard about who sold places in a bomb shelter. I knew that this was rather an extreme reaction to the threat of war but I was so scared of death. Dying young like Nick, my husband was my worst nightmare. A few days later, it was announced on T.V: 'The national ballot has re-in forced the government's belief that war is now our only option, therefore troops are being sent to Iraq, we are now at war'. I was in the office, for minutes we all stood, stunned. Everyone had hoped in our heart of hearts that it wouldn't come to this, now everyone's hopes were shattered. Some people started to pray, some just wept, others got angry, we all have our ways of dealing with things, mine was to shut down, block everything out. I couldn't cope; the atmosphere was crushing me, suffocating me slowly like a blanket of sadness. I ran through the door and stumbled down the stairs, I fought my way out of the building. As I escaped into the open, executives in suits surrounded me; they stared at my tear stained face, exposing my pain as they pushed by. I kept running, as far as possible until my legs collapsed beneath me. It was only then that my defences finally broke; In the middle of the teeming sidewalk, I let myself weep. ...read more.

There was only one thing we all had in common; we all had the same agenda, survival. The bunker was far out of the city, in a wooded clearing, peaceful and pure, untouched by the evil hand of man. If only it hadn't been like this, if only I had lived a normal life, got old and died happy... if only. As we were led with our belongings into the cavernous bunker, I felt a sudden pang of guilt; it soon subsided. I felt relieved; I was going to be fine, I was going to survive. * * * A year on and still I sit lost in endless thought. I think about all the people, killed just days, after I came here for a pointless war. I think how I've changed; people say we all have, for the better, I know in my heart that I've changed for the worse. I keep asking myself questions like; 'why do I live when so many died?' The answer is that I don't. Oh, I eat, sleep, and breathe, but really, I died with all the others, at least my soul did. It died when I put myself first, when I deceived my family and let fear kill my conscience, my morality. I killed my soul as soon as I called to come here. Without a soul, I live a half-life, filled with pain and guilt that I will carry with me through this life and the next. I paid with my soul for a half-life in a bunker, a half-life, in lead. The end Helen Crutcher ...read more.