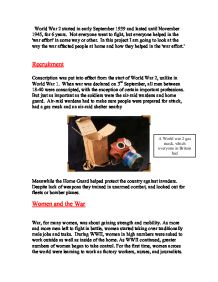 Life on the home front during WW2.

World War 2 started in early September 1939 and lasted until November 1945, for 6 years. Not everyone went to fight, but everyone helped in the 'war effort' in some way or other. In this project I am going to look at the way the war affected people at home and how they helped in the 'war effort.' Recruitment Conscription was put into effect from the start of World War 2, unlike in World War 1. When war was declared on 3rd September, all men between 18-40 were conscripted, with the exception of certain important professions. But just as important as the soldiers were the air-raid wardens and home guard. Air-raid wardens had to make sure people were prepared for attack, had a gas mask and an air-raid shelter nearby Meanwhile the Home Guard helped protect the country against invaders. ...read more.

Rationing The food situation in World War 2 gradually worsened as the German u-boats sank the merchant ships. By 1940 the situation was very bad and the country introduced rationing on the 5th January, each person was allowed a small amount of butter, meat and bread. Children were given a small bottle of milk at school and concentrated orange juice was available for the very young. Each household would cultivate their gardens for vegetables, and in some areas commons and public grounds were ploughed up for the staple foods such as wheat, oats and barley. As the U-boats were sunk and the situation was relieved somewhat the food from the prairies of North America and Canada helped enormously, though the rationing of food and clothing remained for some years after the war. Evacuation On the 1st September 1939, even before Britain went to war with Germany, the first Evacuation began. ...read more.

The blackout came into force on 1st September 1939. This was an attempt to stop the German bombers seeing their targets, and involved every source of light being put out. The air-raid precautions were looked after by air-raid wardens who were a major factor in Britain's relatively successful defense o the Blitz. Propaganda and Censorship As in World War 1, propaganda mainly targeted men, persuading them to join the army. However there were also a lot of posters aimed at women, asking them to work and not to waste food. Censorship in the war was very high as The Ministry of Information was very concerned about German spies. Newspapers and radio were told to concentrate on British heroism not true facts. In conclusion life on the home front was very difficult in the time of war, with the Blitz, and food shortages. But British Bulldog Spirit helped pull the British through, and stop the Germans invading. ...read more.