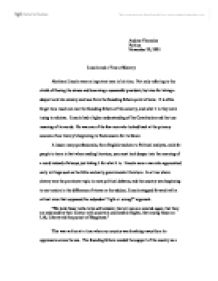 Lincoln and a Time of Slavery

Andrew Themeles Politics November 20, 2001 Lincoln and a Time of Slavery Abraham Lincoln was an important man in his time. Not only referring to the clich� of freeing the slaves and becoming a successful president, but also for taking a deeper look into slavery and race from the founding fathers point of view. It is often forgot how much we owe the founding fathers of this country, and what it is they were trying to achieve. Lincoln had a higher understanding of the Constitution and the true meaning of its words. He was one of the few men who looked back at the primary sources of our history's beginning to find answers for its future. A lesson many professionals, from English teachers to Political analysts, wish for people to learn is that when reading literature, you must look deeper into the meaning of a word instead of always just taking it for what it is. Lincoln was a man who appreciated early writings such as the bible and early governmental literature. In a time where slavery was the prominent topic in most political debates, and the country was beginning to see tension in the difference of views on the subject, Lincoln stepped forward with a critical view that surpassed the redundant "right or wrong?" argument. "We hold these truths to be self-evident, that all men are created equal, that they are endowed by their Creator with uncertain unalienable Rights, that among these are Life, Liberty and the pursuit of Happiness." ...read more.

Lincoln unlike many other speakers on a topic or believers in a view, knew how to maintain his beliefs without sounding radical or without compromise. He sympathized with the South and did not impugn their character or place in society. This was not a ploy to gain respect or alliance from the peoples of the South. Lincoln truly believed this, which is a noble characteristic; one that defines why he was an advocate of anti-slavery. Few people can look back on a lifetime say they were as true and consistent as him. Looking at Lincoln's writings, we know he hated slavery and would have abolished it if it were possible. With a great nation in its infancy, there were many whose lively hoods depended on slavery and would be willing to fight to keep it in business. Lincoln never preached any ideas of how to abolish slavery. "But a moment's reflection would convince me, that whoever of high hope, (as I think there is) there may be in this, in the long run, its sudden execution is impossible" It was understood to be an impossibility for slavery to be abolished, and this is where Lincoln shows his ability to make reasonable demands or requests of his countrymen. Stephen Douglas was a long time opponent of Lincoln's. In a lot of ways he was similar to Lincoln, but when it came down to character and principles, Lincoln was in his own league. ...read more.

He was an advocate of the abolishment of slavery, as was Lincoln, but felt that the achievement of the abolishment should be done right away. He did not share Lincoln's patience, and looked at the situation as - if one does not agree with the striving efforts to make a quick, one move abolishment, than they were not one hundred percent against slavery. Douglas said that from an abolitionist point of view, Lincoln was "tardy, cold, dull and indifferent". However Douglas showed his undeniable respect for Lincoln in saying, "...measuring him by the sentiment of his country, a sentiment he has bound as a statesman to consult, he was swift, zealous, radical and determined." Lincoln as a citizen of America, was a model citizen who had qualities about him that every American should hold. He respected the founders and the bases of the founding if this country so much, that it controlled the course of his political career. As a politician, Lincoln was a man who could boast of a characteristic that is desirable for any man in his position. Lincoln had a balance - a balance between his duty as a politician, President and countrymen. He acted out of strict morals and appreciation for the liberties he knew to be holy. Those liberties he knew, he felt every man of any race should be able to enjoy. Respectively, it could be said, that Lincoln himself was a founding father. He founded, in his time, a contemporary look at how we should celebrate the will of the founding fathers. ...read more.