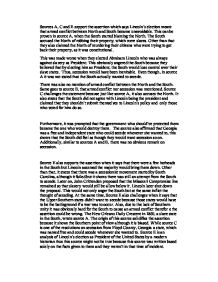 Sources A, C and E support the assertion which says Lincoln's election meant that armed conflict between North and South became unavoidable. This can be proven in source A, when the South started blaming the North. The South accused the North of robbing their property, which were slaves. Other than that they also claimed the North of murdering their citizens who were trying to get back their property, as it was constitutional. This was made worse when they elected Abraham Lincoln who was always against slavery as President. This obviously angered the South because they believed that by electing him as President, the South would lose control over their slave states. Thus, secession would have been inevitable. Even though, in source A it was not stated that the South actually wanted to secede. There was also no mention of armed conflict between the North and the South. Same goes to source B, that armed conflict nor secession was mentioned. ...read more.

Later on, John Crittenden proposed that the Missouri Compromise line remained so that slavery would still be allow below it. Lincoln later shut down the proposal. This would not only anger the South but at the same inflict the thought of seceding. At the same time, Source E also challenges when it says that the Upper Southern states didn't want to secede because those states would have to be the battleground if a war was to occur. Also, due to the lack of Southern unity it was obviously hard for the South to cause an armed conflict therefore the assertion could be wrong. The New Orleans Daily Crescent in 1860, a slave state in the South, wrote source A. The origin of this source solidifies the assertion because it shows the Southern point of view although it is biased. While source C is one of the resolutions on secession from Floyd County, Georgia a state, which was named free and could secede whenever she wanted to. ...read more.

Even though the congress had made a misconception on the South, he still believed that holding on to the Union would be a wise thing to do as it affected their safety. Despite that, this source also shows a hint of support to the assertion as the Senator had to reassure in an urgent manner to hold on to the Union as he already thought the South was on their way of seceding. Alexander Stephens, who challenged the assertion, wrote source B in 1860, later became the Vice-President of the Confederate States of America. This shows that the South actually seceded and that the will of the majority also changed in the end because by then Lincoln was already elected as President. Source D, a source written by Senator Crittenden from a slave state, Kentucky was a final plea for peace. This shows that the South was really desperate to stay in the Union as they didn't want to secede. In conclusion, none of the sources directly mentioned secession or armed conflict therefore the assertion should have been Lincoln's election caused divergence between the South and the North. ...read more.