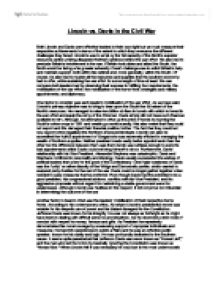 Lincoln vs. Davis in the Civil War

Lincoln vs. Davis in the Civil War Both Lincoln and Davis were effective leaders in their own right but we must measure their respective achievements in terms of the extent to which they overcame the different challenges they faced. Lincoln's was to employ the full capacity of the North's superior resources whilst unifying disparate Northern opinions behind the war effort. He also had to preclude Britain's involvement in the war; if Britain took sides and aided the South, the North would be facing a far greater adversity. Davis' challenge was to solicit Britain's help and maintain support, both within his cabinet and, more generally, within the South. Of course, he also had to muster all the resources and supplies that the southern economy had to offer, while sustaining the war effort for some length of time at least. We can compare both leaders had by observing their success in fulfilling four requirements: the mobilisation of the war effort; the mobilisation of the home front; strategies and military appointments; and diplomacy. One factor to consider was each leader's mobilisation of the war effort. As we have said, Lincoln's primary objective was to bring to bear upon the South the full extent of the North's resources. He managed to raise two billion dollars in bonds with which to invest in the war effort and equip the Army of the Potomac. ...read more.

Lincoln ordered thousands of arrests, kept political enemies in prison without bringing charges against them, refused these hapless men their right to trial by a jury of their peers, and ignored orders from the Chief Justice of the Supreme Court to release them. In his first few months in office he made the most direct violations of the Constitution in the Nation's history. He increased the size of the Regular Army without Congressional approval, spent money without Congressional authorisation, suspended the writ of habeas corpus without authority and avoided consultation with the other two branches of the government. He neglected the Constitution but managed to retain the popular appeal of the masses. Davis, contrarily, was handicapped by the excessive individualism which characterised the South's ruling classes and did little to disband these divisions. The individualism was a product of the plantation system. Each planter was in effect a petty sovereign and his exalted status tended to make him self-reliant, proud, resentful of opposition, and averse to teamwork. Davis lacked popular appeal. At no time in his life did he mingle freely with the masses under circumstances that might have enabled him to develop an appreciation of their aspirations and virtues. He never felt close to them, nor they to him. ...read more.

They fought McClellan to a standstill with their backs to the Potomac. They remained on the field for another day, when they could have retreated. Lee gave Davis all of the ammunition required for a diplomatic stratagem. Nothing Lee or the other war heroes of the Confederacy did on the battlefield measured up to what Lincoln did with manipulating public opinion both home and abroad. In making comparisons with the Revolutionary War, which many historians prefer to do, it will be remembered that the future of the Revolution looked bleak until the Continental army's victory over the British and Hessians at Saratoga. However, this victory alone accomplished nothing. It was very important to have strong statesmen in foreign capitals extolling the accomplishments of the armies in the field. At this, the Continental Congress was very proficient but the Confederate diplomats were not so perceptive. Quite simply the South failed to attain the only asset that would enable victory. In summary, Lincoln was superior in the areas of leadership that mattered most. He was better war leader, with the courage and tenacity to go to great lengths to achieve victory. Davis was perhaps too cautious in some respects but he cannot be solely imputed for the South's defeat since there are many aspects of leadership that he fulfilled adequately; there were circumstances that could not be overcome and determined that the South would lose despite Davis' best efforts. ?? ?? ?? ?? ...read more.