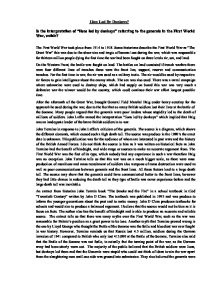 Lion Led By Donkeys? Is the interpretation of "lions led by donkeys" referring to the generals in the First World War, unfair? The First World War took place from 1914 to 1918. Some historians describe the First World War as "The Great War" this was due to the sheer size and tragic of human loss during the war, which was responsible for thirteen million people dying the first time the war had been fought on three levels air, sea, and land. On the Western Front, the battle was fought on land. The battles on land consisted if trench warfare there were four different lines of trenches these were the front line, support, reserve and communication trenches. For the first time in war, the air was used as a military tactic. The air would be used by respective air forces to gain intelligence about the enemy attack. The sea was also used. There was a naval campaign where submarine were used to destroy ships, which had supply on board this war was very much a defensive war the winner would be the country, which could continue their war effort longest possible time. After the aftermath of the Great War, brought General Field Marshal Haig under heavy scrutiny for the approach he used during the war, due to the fact that so many British soldiers lost their lives at the battle of the Somme. Many people argued that the generals were poor leaders whose stupidity led to the death of millions of soldiers. ...read more.

His aim was to make the generals the scapegoats meaning the blame for the amount of soldier who died in the battle was shifted away from himself. A primary source, which was in the form of report on the aftermath of the Battle of the Somme. Tells us that the German casualties were greater then the British casualties. It also tells us that the constant attacking by the British army wore the German army out and they become dishearten. The source does not tell us the number of casualties of both European powers. This could be because the information was censored so that the public would not be come rebellious against the government. The source claims that the German army became tiered and dishearten this view is supported by references made by General Ludendorff in his War Memoirs that were written in 1920 which says, "The German army had been fought to a standstill and was utterly worn out." The Generals continuous attack on the German army turned the war, thus may had been the plan all along, the soldiers that dies were martyred as their efforts changed the war in the British favour. AJP Taylor was an historian who loves the First and Second World War and the time in-between. The source tells us that Haig believed that victory was certain as they had god on their side. The source also tell us that not only did Haig had the pressures of the battle, but also the French made it difficult for him, by not allowing Haig to wait for the tanks to arrive. ...read more.

This source is not reliable as it is bias against Haig. The source I am going to evaluate is the one of Winston Churchill; the source is a book, which was produce after the battle of Western Front in 1916. The source was produce to inform people of the going on in Germany. The source is telling us that that the British casualties were never less then 3 to 2 against the Germans casualties, this was written as criticism of the way the battle was fought and conducted. This became clearer when Churchill went on to say "a welter of slaughter" he is saying that he is shocked and appalled by the amount of death, which occurred. Which make me believe he his a bit of a hypocrite as what the source does not tell us is that his role of First Lord of the Admiralty which meant he was the one who was responsible for giving Haig and the other general weapons and men to fight the war. In conclusion, the title, which was given to Haig and the other General claiming that they were "donkeys" which led brave soldiers to their death, could be said to be fair. The death toll was very high, however I feel that this was inevitable for the type of war that was seen, also the French allies did not help the general's situation. So to complely scapegoat the generals of the war would be wrong, thought they may have made some mistakes but they were doing their job to the best of their ability. The General successfully did their job, which was to win the war. ?? ?? ?? ?? ...read more.